Under the Dome: "Thicker Than Water" 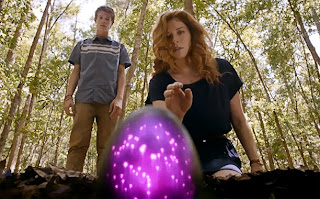 It's our eighth day under the dome: the showdown between Big Jim and Ollie the farmer heats up, as does the conflict between Big Jim and Junior, as well as Big Jim and Barbie. Joe shows Julia the glowing egg in the woods. Norrie and Angie bond as Norrie grieves for her mother. Some people get shot. Some stuff explodes. There's some more ominous but perplexing foreshadowing.

Each week it becomes more and more obvious what a debt Under the Dome owes to Lost. It's got the diverse spread of ordinary people trapped in extraordinary circumstances, and more significantly it has the long, teased-out hints at explanations like a heat haze on the horizon. I used to be fascinated by heat hazes as a child. I grew up in north-western Australia, and when you drove down the highway there would always be this shimmering water-like mirage at the end of the road. No matter how far you'd drive, you'd never reach it. I was fixated on that image as a kid, and I feel like I'm back on that highway again when watching this series. There's a shimmering explanation for what's going on somewhere ahead, but it's pretty obvious we're not reaching it any time soon.

Julia is informed by a dome-induced hallucination that 'the monarch will be crowned'. The episode ends with the revelation that Angie has a tattoo of a monarch butterfly, as well as my personal realisation that not only do I not think I'm going to find out what's going on with the dome any time soon, I actually don't really care any more. This series had a lot of potential with its setup and premise, but it's squandered that potential dreadfully.

A lot happens very conveniently in this episode. The confrontation between Jim and Ollie descends into a violent mass shoot-out, the losers of which appear to surrender and run away remarkably fast. Several people die, but it doesn't seem that important to anyone on screen. Junior continues to be visibly unhinged, yet no one seems to be anything more than slightly suspicious of his behaviour. Phil the radio DJ takes a bullet, but given the series' cavalier attitude to its one-day-per-episode premise I suspect he'll be healed up by the end of the season. Hell, he'll probably be healed up in two days' time. Norrie appears to take precisely a day to grieve for her mother's death - at least that's how it feels. By all rights this entire episode should have seen her in a foetal position, but that wouldn't make for a good soap.

That is, ultimately, what this series is: a soap opera. The characters engage in little dramas that don't add up to much, what happened last week means little compared to what's happening right now, everybody acts like every event is a significant drama yet nobody acknowledges they're running in emotional circles.

This episode was a real chore to sit through. It leaves Under the Dome with four good episodes out of eight, or 50%.
Posted by Grant at 9:22 AM