Under the Dome: "The Endless Thirst" 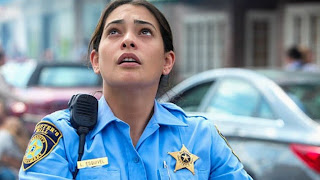 Tensions continue to rise inside the dome as Chester's Mill runs out of fresh drinking water.  The townsfolk begin to riot, while Julia tracks down a source of radio interference, Joe and Norrie go looking for insulin, Angie hides from Junior and Big Jim goes negotiating for the town's last surviving well of fresh water.

"The Endless Thirst" is, all told, a better episode than last week's effort. That said, it's still fairly ropey television drama. For me, the biggest problem with the series at this stage is that it's getting kind of boring. I care less about the town's survival issues and care more about what the dome is, who made it and what it's for. The longer the production holds off from answering those questions, the less interested I become. CBS confirmed this week that it had commissioned a second season of Under the Dome for 2014, so I'm guessing we won't be getting answers worth a damn this season.

I think the closest predecessor to Under the Dome is Twin Peaks, another small town mystery series. It too fell into a similar trap, albeit in a far more intriguing and stylish manner. Audiences flocked to that series from the outset due to its sensational central question of 'who killed Laura Palmer?' When it became apparent that the answer to that question wasn't forthcoming (the mystery was only ever a hook to pull viewers to the show) Twin Peaks staggered in the ratings. By the time they did answer the question, half of the people asking had already wandered off. I think Under the Dome is clearly falling into the same trap.


I have to say that everybody in Chester's Mill is looking in rather rude health given that half of them were dying of meningitis two days ago. Just for the record, Australia's Meningitis Centre indicates that it takes 1-2 weeks to recover from meningitis following proper medical treatment. Chester's Mill was overwhelmed with patients with limited medication and no qualified GPs in town, yet as far as can be seen everybody's made an outstanding recovery.

What is basically happening is a fairly common disconnect between what time the characters should be feeling has passed, and what time the production team and audience feel has passed. For the viewer, Chester's Mill has been 'under the dome' for six weeks now, and the characters generally act like people who have been trapped there for six weeks. The thing is, it hasn't been six weeks. It's been less than one week. This is a problem that plagues all shows of this nature, whether it's Under the Dome, Lost or 24. It drives me crazy every time it happens.

I didn't hate this episode. I didn't love this episode, and I really don't think you'll lose anything by skipping it. This gives Under the Dome an overall season score of 50%: three good episodes, three not so good. Mediocrity in action.
Posted by Grant at 10:34 AM