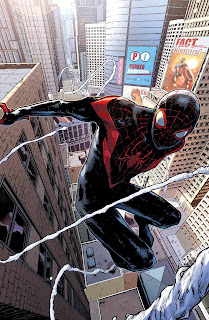 I was all ready to give up on reading Ultimate Spider-Man. The book had relaunched in a pointless manner, the story was slowing to an intolerable crawl, and just when things finally pulled together into an interesting climax it all got abandoned in favour of the much-delayed and jaw-droppingly dreadful Ultimate End. I figured enough was enough, and whatever form in which Miles Morales, the Ultimate Spider-Man, returned, I was out for good.

Then I found myself buying issue #1 of Marvel's new Spider-Man, which brings Miles into the main Marvel Universe for the first time. It's pretty good. The wonderfully appealing characters that Brian Michael Bendis created are here, and the story sets up in a fairly nice fashion, and the great dialogue is back. Rather frustratingly it holds off explain how Miles is in the Marvel Universe now, or what his relationship to Peter Parker is, or how any of this new continuity works. Hopefully Bendis won't take too long to reveal that stuff. Sara Pichelli's artwork (with ink assists by Gaetano Carlucci) is just flat-out great.

This is not a perfect comic book, but I'd be lying if I said it was a bad one. There I was, about to drop Miles for good, and instead Bendis comes back with a last-minute save to get me hooked again. Damn you Brian Michael Bendis. (3/5)

Under the cut: reviews of Giant Days, Obi-Wan & Anakin and The Sheriff of Babylon.

Susan's obsessive management of a student election candidate sends her over the edge and into 'night world syndrome'. This is my favourite issue of Giant Days yet, packed with humour, relationship drama, student politics, surreal and beautiful artwork and colours, and a cameo appearance by real-life film critic superstar Dr Mark Kermode. It's all just so perfectly whimsical that it catches you unawares when something emotional happens. John Allison is such a good comics writer - more people should be tracking down and reading his stuff. (5/5)

While the characterisation is strong and the flashbacks intriguing, and the artwork is visually attractive, Obi-Wan & Anakin is simply a bit too generic and formulaic a comic miniseries with which to bother. I have enjoyed previous miniseries like Lando and Chewbacca, but this one simply doesn't feel like it has the same enthusiasm. It feels less like Soule had an interesting story to tell and more like Lucasfilm and Marvel wanted to publish a prequel era miniseries to test the market. In the end it's a book that is good enough to enjoy but not so good that one would actively recommend it to others. (2/5)

The Sheriff of Babylon #3

In the aftermath of the USA's invasion of Iraq, an American officer struggles to investigate the death of an Iraqi man within a maze of post-conflict strife, changing allegiances and hidden agendas. It's a dense, intelligent and deeply adult crime drama, set in a simmering war zone, that comes from a writer who was actually there at the time. You can feel it: this book has a remarkable authenticity to it. It's also a gripping thriller with great arwork, and absolutely sensational panel layouts. Vertigo has not had a book this good in years. (5/5)