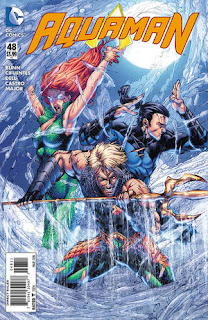 Aquaman #48 ends the brief run on the book by writer Cullen Bunn. It started with such a sudden, dramatic hook: Arthur on the run from his own people, and his wife Mera ruling Atlantis in his place while issuing warrants for his execution. It seemed to have a lot of promise to it, but for some reason that promise never quite eventuated. A lot of that might be due to the negative fan reaction Bunn claimed to have received when announced as the book's writer. He found some responses so aggressively negative that he had actually quit the book before his first issue had been released. That's depressing: disliking a writer's take on a comic book is fair enough, but it is not unfair to expect the fans to at least sample a book before writing it off.

The last few months have simply been a case of wrapping up a large, expansive storyline in the quickest and neatest manner possible. That is certainly what happens here. Arthur and Mera are reunited, he becomes king again, Atlantis sides with him, and he and the Justice League defeat the rival kingdom of Thule - all in the space of 20 pages. It's certainly fast-paced, and the art by Vincente Cifuentes (with inkers John Dell and Juan Castro) is really strong, but the abrupt nature of the story kind of steals its thunder.

Aquaman is a really tricky superhero for whom to write, and some writers do better jobs of it than others. In Bunn's case it feels as if his heart fell out of things almost as soon as he started. I would love to have seen him take a more enthused track at the title, but thanks to the vocal minority of Internet-based fans it seems we can't always have nice things. This was a really fun issue, but I regret not being able to see the whole run from beginning to end as Bunn had originally intended. (3/5)

Under the cut: reviews of The Spire, Strayer and Venus.

Sha goes undercover to accompany Lady Meera in her meeting with the Zoarim. At this stage The Spire is six issues in and so its merits have become comforting and familiar: a nice blend of mystical fantasy and slightly spiky, irritable characters, some wonderful and inobtrusive world-building, beautiful artwork by Jeff Stokely that crosses Miyazaki with Moebius, and a nice ability to surprise. This issue certainly surprised me: I had no idea the story was going to move in this direction. From beginning to cliffhanger end, it's a brilliant issue for a brilliant comic. (5/5)

This is the first book I have sampled from new independent publisher Aftershock Comics. They launched in April last year under the supervision of editor-in-chief Mike Marts - who previously guided both the Batman and X-Men franchises for the Big Two. This new series by Justin Jordan and Juan Gideon follows a monster-slaying warrior named Strayer in a post-apocalyptic science fantasy world. It's got a little bit in the way of character introduction, a big fight sequence with a flame-eyed giant, and a cliffhanger hook. It's not exceptionally gripping, but it's reasonably solid. Anybody looking for an action fantasy should check it out. (3/5)

An American mission to the planet Venus has catastrophically failed, with the crew scrambling to survive in the wake of a crashed spacecraft, local earthquakes and the death of their original captain. Now it appears that sabotage was involved - and that is not even the worst news that the team receives. Rick Loverd's script is gripping, and taps in a very timely manner into popular hits like The Martian and Gravity. Huang Danlan's art is sensational, and very expressively coloured by Marcio Menyz. This is another great miniseries from Boom Studios, who have spent the last few years cultivating a real niche for these sorts of smart, entertaining short-run comic books. (5/5)
Posted by Grant at 9:35 AM