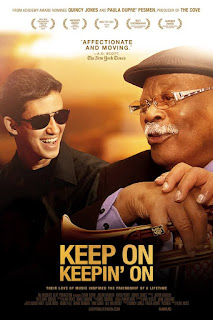 A filmmaker once told me that the trick to making a good documentary is to find a subject that you are going to find interesting for at least two years. If you can document that subject for so long and not get bored, then an audience will happily watch that same subject in a cinema for two hours.

Australian director Alan Hicks has certainly proved this to be the case, having found two remarkable subjects for his feature documentary debut. Keep On Keepin' On focuses on jazz legend Clark Terry. At the time Hicks' shoot commenced in 2011 he was 91 years old, rendered blind and largely immobile by steadily worsening diabetes. In addition to being one of the most highly regarded trumpeters of all time he has also been both an inspiration and a teacher. His former students include Quincy Jones, Miles Davis, Herbie Hancock and Terri Lynne Carrington. Despite his age and declining health, Terry is found in Keep On Keepin' On tutoring yet another jazz prodigy: the blind 23 year-old jazz pianist Justin Kauflin.

The film acts in part as a record of Terry's long and impressive career, and his immeasurable musical talent. It acts in part as a window into Kauflin's attempt to overcome stage fright and underconfidence to express his own remarkable talent. Most of all, however, it presents a beautiful and life-affirming friendship between a young man at the beginning of his adventure and an old master approaching the end of his own.

The term 'legend' does not quite do Clark Terry justice. Born in 1920, he begged local jazz musicians to teach him how to play the trumpet. He got his professional break playing in Count Basie's band, before moving over to the Duke Ellington Orchestra. Years after teaching a young Quincy Jones how to play, he went and played in Jones' orchestra as well. When he signed on to play trumpet for the NBC studio orchestra, he became the first African American hired full-time to play music on a television network. By the end of his career Terry had appeared on more than 900 jazz recordings. He also taught extensively at William Paterson University, which is what brought him into contact with Justin Kauflin. Over the course of his life Terry received sixteen honorary doctorates, a Grammy lifetime achievement award, the French Order of Arts and Letters, a German knighthood, and the National Endowment for the Arts jazz award.

Into Clark's life has come Justin Kauflin: young, enthused, nervous, and also blind. There is an immediate connection between the two men. It's entirely about their joy in music. It's basically an irrelevance that neither man has his vision. The music is what connects them and what keeps them going. Terry's love for music in particular flows through his body. He is happy when talking music, or teaching music. He's even happier when playing it, either gently playing his trumpet or enthusiastically singing along to Kauflin's piano. There is a remarkable joy in seeing someone with so much talent still find immense satisfaction in it, even after a 70-year career.

With the two protagonists established, the film follows them through the next two years. For Kauflin it's the development of his skills and a struggle to overcome his fears and find his own voice. For Clark it's a struggle with failing health, and the difficult choices that come when somebody is fast approaching the end of their life. Both are emotionally resonant and powerful, but it's when they bounce off one another that the film is at its strongest.

The film is well structured, with an opening act that delivers a concise and inspiring biography of both men before the second and third acts tell their story together. Hicks has struck a goldmine here, in that true life has provided his film with a proper narrative and an emotionally powerful climax. This is simply a wonderful movie. Immediately after watching it I was compelled to put on some jazz music and sink into the artistry and soul of it myself.
Posted by Grant at 11:20 PM