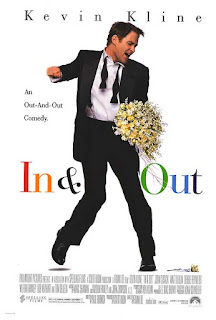 Howard Brackett (Kevin Kline) is a well-liked small town English literature teacher and sporting coach. He is days away from his long-delayed wedding to fellow teacher Emily Montgomery (Joan Cusack), and one of his former students (Matt Dillon) has been nominated for an Academy Award. When his student suddenly announced during his acceptance speech that Howard is gay, Howard's life gets turned upside-down as the entire town begins to second-guess and doubt his sexuality. On top of everything else, a pushy TV news reporter (Tom Selleck) arrives in town to make his life even more miserable.

There is a weirdly awkward quality to In & Out, a 1997 romantic comedy directed by Frank Oz. It is as if the entire film is on shaky, unfamiliar territory. It is a mainstream Hollywood comedy about homosexuality, one seemingly terrified of causing offence to both the LGBTI community and the pre-existing puritanical American market that it needs to make a profit. Some moments are perfectly pitched. Some feel oddly but mildly offensive. Ultimately it really does just feel a little bit uncertain of itself.

And why shouldn't it be? For 1997 this kind of gay-positive mainstream comedy was extraordinarily progressive. It would be easy to criticise the film for the few moments in which it stumbles or mishandles its subject matter. It is slightly harder to take a step back and applaud its intent instead. What makes the film particularly admirable is the manner in which it deliberately separates love and sex. Hollywood traditionally makes sexual diversity about sex itself. In & Out does not really address sexual activity at all. It is too busy focusing on romance instead. I think that works tremendously to its advantage.

When it shines, the film positively glows. The highlight, for me at least, is a ten-second kiss between Kevin Kline and Tom Selleck that boasts some of the finest physical comedy work I've seen in a film. Both Kline and Selleck excel throughout. Selleck is a delight, playing reporter Peter Malloy in an incredibly funny, relaxed and very believably gay manner. He is not a cliché, or a mean-spirited joke. He is a driven, ambitious, relatively shallow journalist who simply happens to be gay. It's the sort of portrayal that saves the movie from becoming an awful sort of parody. I have always been a big fan of Selleck, and this performance is yet another reason why he should have been a much more popular and successful actor. His screen chemistry and charisma is off the chart for me. Somewhere there is a parallel universe where he made four or five Indiana Jones pictures and became the biggest Hollywood star of the late 20th century.

Kevin Kline plays Howard in an ongoing state of panic. He keeps insisting to his fellow townsfolk that he is straight, and evidence keeps piling on to the contrary. He keeps a very likeable quality to the character, and builds a huge amount of audience sympathy for what is clearly an awful situation for him. To the film's credit most of the townsfolk seem remarkably relaxed and non-judgemental, leaving just Howard to fret and panic for the bulk of the film on his own. Of course it turns out that Howard is gay, but so closeted he had not realised it himself. I remain uncertain of what the best narrative direction for the film would have been: to have him realise he is gay, or have him maintain his heterosexuality. For the direction that writer Paul Rudnick picks, I think they ultimately do okay.

The secret weapon in this film is Joan Cusack. She is always a welcome presence in a comedy, but here she really sneaks up on the viewer. Emily begins the film in such a by-the-numbers sort of a way: clean, wholesome, conservatively dressed. When Howard's sexuality comes under question she's supportive but concerned. When he announces he's gay at the wedding altar, her life collapses. Her tirade at him is a beautiful scene: funny, angry, sad, and perfectly performed. It is really nice to see that her character does not get ignored or side-lined at the expense of Howard's. She matters just as much.

If there is a major criticism of the film, it is that once Howard announces he is gay the story simply does not have anywhere to go. It peaks much too early, and has to spend another half hour or so meandering around in a lazy search for an ending. The character work is good - particularly a lovely scene between Kline and Wilford Brimley (playing Howard's father) - but it simply loses all momentum and never manages to get it back. It is a bit of a shame, because when it is at its best In & Out is really entertaining stuff.
Posted by Grant at 5:00 PM