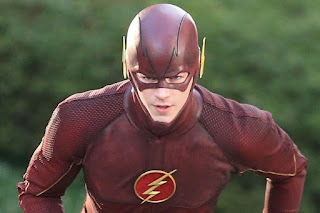 Barry Allen (Grant Gustin) is a young forensic analyst working for the Central City police department. During a freak confluence of a particle accelerator explosion and a thunderstorm Barry is struck by lightning and falls into a coma. When he awakes nine months later he finds he has the power to move at super-sonic speeds. He decides to use his new-found powers to fight crime and track down everybody else given strange powers during the storm.

The Flash is a live-action television series based on the popular DC Comics character. It is also a spin-off from the already successful CW series Arrow - also based on a comic book - and has been a reasonably big hit for the network since its debut last year. I am a huge fan of the Flash in the comics, and liked the original television adaptation way back in 1990 or so, so I was keen to see if the new version lived up to its potential.

The answer, rather predictably, is yes and no. The Flash is, after all, a CW drama that is aimed at a young American audience. That tends to make the entire cast talk in either simplistic clichés or like a character from a Joss Whedon series. Of course by this point even sounding like Joss Whedon has become a bit of a cliché. Basically this series will not be winning any awards for its dialogue or characters.

The storyline is hardly impressive either. Barry gets powers, and tests those powers. A villain also gets powers, and uses them for evil. Barry challenges the villain, they have a super-powered fight, Barry wins and the villain loses. It is hardly taxing stuff, in fact it occasionally goes as far as risible. Then Barry puts on his Flash suit, and runs like a bolt of lightning, and to be honest the poor plotting and dialogue really don't matter too much any more because the lifelong fan of the Flash inside is smiling too much.

For the ardent DC Comics fan The Flash seems littered with easter eggs, cameos and references: Green Arrow. Gorilla Grodd. STAR Labs, The Weather Wizard. The Reverse Flash. Crisis on Infinite Earths, Green Lantern. There is an active attempt here to replicate the DC Universe in a similar manner to Marvel's Cinematic Universe. It is all woven in neatly and in such a wonderfully pleasing manner.

Grant Gustin is very watchable as Barry, and to a large extent manages to paper over half of the script issues with his screen presence alone. It is interesting that by making the character about a decade younger than his comic book equivalent he has been effectively transformed into Tobey Maguire's rendition of Spider-Man. Tom Cavanagh is also fairly solid as scientist and STAR Labs founder Harrison Wells. In a genuinely sweet touch, 1990 Flash actor John Wesley Shipp plays Barry's wrongfully incarcerated father Henry. Beyond that there is a case of diminishing returns. As Iris West, Barry's lifelong crush, Candice Patton is fairly mediocre. Carlos Valdes is mildly annoying as lab assistant Cisco. Danielle Panabaker simply doesn't get a chance to impress in this pilot episode - she is stuck playing the ultra-slender scientific nerd girl cliche who seems to populate most of these kinds of shows.

In the end this pilot episode is amiable and harmless. It's that special kind of disposable fun: breezy and enjoyable but also kind of awful. I did enjoy watching it to a certain extent, but I struggle to imagine watching it again. When I review SF television on this blog, I generally assign episodes as simply either good or bad, and work out a ratio of good as the season goes on. This is far from the worst television out there, and it is fun for trivia-obsessed comic book fans, but I cannot in good conscience claim it was good. The Flash Season 1 kicks off with a quality ratio of zero per cent: it can only get better from here.
Posted by Grant at 11:51 AM