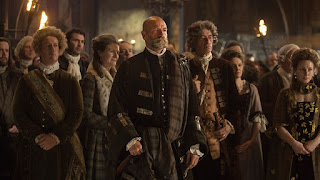 While Claire (Catriona Balfe) develops a plan of escape from Castle Leoch, the McKenzie clan assembles to pledge fealty to Colum (Gary Lewis). The ceremony proves a dangerous one to Jamie (Sam Heughan), whose unique position could see him executed on the spot should he say the wrong thing. A boar hunt leads to tragedy - and a renewed respect between Claire and Dougal (Graham McTavish).

"The Gathering" is a weirdly messy and disconnected episode, saddled with a wobbly plot structure, some oddly two-dimensional dialogue, and more of the irritating elements that keep getting in the way of Outlander becoming a genuinely brilliant television drama. Of the four episodes viewed so far it is the first that I did not particularly enjoy.

This is not for a lack of decent material. As always the episode is very well shot, and a boar hunt sequence in particular is well paced and plays out in a very dramatic fashion. The problem, in the end, comes down to Dougal.

So far Dougal McKenzie has been an intriguing character: the dour, moody brother of Laird Colum, he has commanded forays out against the English and seems to stand ever-present in the corners of rooms in a threatening and ominous fashion. He's been suspicious of Claire from the outset, and that suspicion has bordered on active resentment. At the same time there's been something oddly noble about him; he clearly has the best interests of his clan and his people at heart.

During Claire's escape attempt, which takes place midway through the episode, she finds herself accosted by three random McKenzies - who immediately go about attempting to assault her. She is promptly rescued by Dougal, who beats the men and sends them away before attempting to sexually assault her himself. It's a momentary thing, and he fumbles drunkenly to undress her before Claire knocks him out cold with a stick, but it remains deeply unpleasant and pretty much destroys any chance of the audience - well, me at any rate - fully liking Dougal ever again.

The problem is - asides from this being yet another attempted rape in the series - that pretty much immediately after this incident the episode goes about trying to make the audience like Dougal again. Jamie argues in a weirdly light-hearted and dismissive manner that Dougal was drunk, as if that excuses the behaviour. At the boar hunt a man is gored and dies in Dougal's arms, and the dialogue and photography goes out of its way to develop some form of renewed respect between Claire and Dougal as a result. At the episode's end he invites her to travel with him in collecting rents from the McKenzie's lands, and she seems to go with him without complaint.

It is the worst kind of treatment of sexual assault: one that uses the threat of rape for a momentary story beat, and then dismisses its effects entirely. It's presented as no big deal, just another hurdle for Claire to jump over in her quest to return to the standing stones that brought her to the 18th century. For me it renders the episode kind of unwatchable.

That is before we get to the issue of the episode's bizarre plot structure, which appears to focus on an escape plan before abandoning it in favour of Jamie's troubles pledging fielty to Colum without getting killed by Dougal (pledging to Colum would, for backstory reasons, throw Jamie ahead of Dougal in the line of succession). As soon as the episode's done with that new plot, it moves onto the boar hunt and Dougal's renewed appreciation of Claire's talents and bearing. It's all a bit of a mess.

We're four episodes in, and there has been one sexual assault and three separate attempted sexual assaults. That all makes for a fairly rapey kind of television series. And to think back in "Castle Leoch" it seemed as if the series might have had a better understanding of the responsibility of portraying sexual assault than other cable dramas. It is not looking so promising any more.

Still, with four episodes down three have been good, and that gives Outlander a current quality ratio of 75 per cent.
Posted by Grant at 9:58 PM