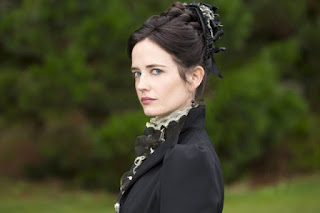 It is London in the year 1891. Some unseen monster is stalking the streets, murdering and mutilating women. American gunslinger Ethan Chandler (Josh Hartnett) is hired by a mysterious woman (Eva Green) to join a late night raid on an opium den - which turns out to be a nest of vampires. The woman's employer, Sir Malcolm Murray (Timothy Dalton) is hunting for his kidnapped daughter Mina. Meanwhile coroner Victor Frankenstein (Harry Treadaway) brings a dead body to life.

That's essentially what happens in the first episode of Penny Dreadful, a television series created by screenwriter John Logan (Gladiator) and produced by noted director Sam Mendes (American Beauty, Skyfall). The series is a mash-up of 19th century literature, including Mary Shelley's Frankenstein and Bram Stoker's Dracula. Future episodes will bring in elements of Stephenson's The Strange Case of Dr Jekyll and Mr Hyde and Wilde's The Picture of Dorian Gray. Penny Dreadful seems perfectly pitched it terms of tone, casting and visuals, but fails to actually put any sort of original plot or driving narrative behind it. In terms of narrative structure this first episode is peculiarly unsatisfying.

It is worth appreciating the series' excellent lead cast. Timothy Dalton gives Murray a nice sense of gravitas. His daughter Mina - one of the protagonists of Stoker's Dracula - has been kidnapped by vampires, and he is desperate to rescue her at any cost. Dalton really does sell that too; it's only been one episode but it's pretty clear there is not a length he will not go to in order to get her back. Eva Green plays Vanessa Ives, Murray's employee in his hunt and a woman seemingly plagued by the supernatural. Of the characters introduced in this first episode she is by far the most intriguing, possibly because she does not seem to be linked to an existing literary source. Green is also a remarkably arresting actress. She has a very strong screen presence, which the episode capitalises on very well. It also gives her a nice degree of authority. Josh Hartnett plays Ethan Chandler, who clearly has a troubled back story waiting to be revealed. The character is not exceptionally interesting, but Hartnett is a solid and underrated performer and does manage to lift Chandler to an extent.

Less effective is Harry Treadaway as Victor Frankenstein. The episode holds off until its final moments to reveal his name, but it is patently obvious who he is from the first time we see him. He seems a petulant, slightly unlikeable character, and not that similar to his literary namesake. This is very much literature as brand: the episode takes names like Murray and Frankenstein because the audience might recognise them, but in both cases the series hews fairly broadly around the original texts. That is fine, I suppose, but I do think there was a better episode to be made - and I assume the series generally - that actually created its own characters instead.

The episode's plot is all over the place, introducing the characters and some of their situations, but not feeling obliged to stick to a firm three-act structure. It is a particular quirk of short-run cable drama: this season only runs to nine episodes, and it seems likely it is structured as a serialised nine-hour film rather than a series of discrete hour-long instalments. It makes this episode fairly unsatisfying to watch, since all it does it throw some plot elements and characters onto the screen and then rolls the closing credits. I think there is a growing assumption in American television that viewers will binge-view several episodes at once, and that is leading to some fairly undisciplined plot structures.

In the end "Night Work" is nicely cast, suitably gloomy and does show some mild potential. In terms of emulating its sources it does reasonably well - the introduction of an ancient Egyptian mystery certainly matches the Victorian era brilliantly - but it does occasionally jar. Frankenstein, for example, is wildly out of period for what the series is aiming to achieve. The episode by itself is a rather dull and disappointing affair. It is crucial for a series' opening episode to set up the characters and the broad story direction while providing the audience with an attention-grabbing drama. "Night Work" succeeds on the first two counts while failing terribly with the third.
Posted by Grant at 9:39 AM