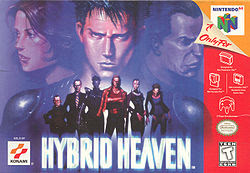 Hybrid Heaven was an odd title for Konami to release on the Nintendo 64. Since launching with Super Mario 64 the N64 had pretty much become the de facto console for children, with a growing range of brightly coloured platform titles and racing games, each featuring a different variety of cute anthropomorphic animal or object. Konami, on the other hand, specialised in slightly more mature action-based titles including the long-running Castlevania franchise as well as PlayStation titles like Silent Hill and Metal Gear Solid. While Konami had released quite a few sports-based and family-friendly titles for the N64, Hybrid Heaven was their first original IP released for the console that actually targeted a more mature audience.

The game allows the player to control Diaz, a synthetic hybrid of humans and aliens created to assume the identity of the US President's bodyguard and to assassinate the President when instructed to do so. Diaz has broken free of the alien control and must fight his way out of an underground alien-controlled facility. Much of the game is played in a 3D action format akin to PlayStation titles like Silent Hill and Tomb Raider. When the player encounters an enemy, however, the action shifts to a turn-based combat system to resolve the encounter.

The turn-based combat system, which appears to blend traditional RPG mechanics with a fighting game, was one of Hybrid Heaven's most unusual aspects. It seems clear there were expectations that the format could be used in future titles, but a lacklustre public response pretty much nixed that idea from the outset. It's a pity: there were a lot of intriguing ideas within the mechanic, including separate health stats for Diaz's limbs and body. Use the same attack all the time, and one limb would become more powerful than the others - and leave the player vulnerable to attacks on the other limbs. A careful balance in combat was needed to ensure the player was not left with an Achilles Heel.

The other key aspect of the game's appeal was simply that it scratched an itch that other Nintendo 64 titles were not itching. Adult-oriented N64 titles were few and far between, and while Hybrid Heaven had a lot of faults it really did feel badly overdue by the time it was released in 1999. As a combination of 3D action-adventure and turn-based RPG it certainly did not have a lot competition, so it was nice to appreciate it for filling the gap.
Posted by Grant at 5:01 PM