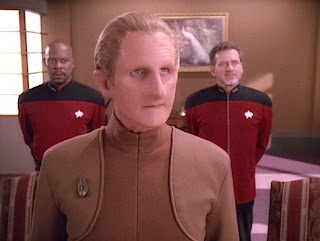 It's 1 January 1996, and time for another episode of Star Trek: Deep Space Nine.

After a terrorist attack kills several dozen people, Captain Sisko (Avery Brooks) and Odo (Rene Auberjonois) travel to Earth to help secure the planet from changeling infiltrators. When Sisko's protection measures begin to limit the freedoms of the planet's civilian population, he finds himself butting heads with his wilful and stubborn father (Brock Peters).

There's an old joke about a BBC production of Zulu, in which that broadcaster's historically meagre budgets result in two British soldiers sitting in a tent and one them pointing outside and remarking "There's thousands of them out there!" That is sort of the feeling I got from "Homefront". It is a big story with a very broad canvas, but its budget dictates that it is told on a very small, uncomfortably intimate stage. As a result we have the entire planet Earth being placed under martial law by Starfleet, told via two offices, a park in San Francisco and a New Orleans restaurant. In short, Deep Space Nine's eyes were bigger than its budget, and as a result the episode suffers dreadfully.

The idea for "Homefront" was originally developed as a Season 3 cliffhanger, but was abandoned when Paramount told the production team not to end the series' third year in such an open-ended fashion. It now returns here, 12 episodes later, and largely scaled back from its original intention to fracture and break up the Federation - that idea evolved into breaking the treaty between the Federation and the Klingons back in "The Way of the Warrior". Even on its more modest scale, the idea for Starfleet to assume martial law over the Federation's subjects should be a bold and provocative foundation for an episode. Instead it is rather underwhelming and dull.

It is actually difficult to pinpoint quite why the episode's central plot does not quite pull together. For one thing it is reasonably slight: the episode takes its sweet time in arriving on Earth, focusing instead on comedic little vignettes involving Dax (Terry Farrell), O'Brien (Colm Meaney) and Bashir (Alexander Siddig). Once the action does move to Earth the entire Starfleet security plot is told with the use of an Admiral (Robert Foxworth), his assistant (Susan Gibney) and the Federation President. The scale is simply too small to convince. Things are not helped by Foxworth's rather disinterested performance. It is a weird piece of casting, since at the time of making "Homefront" he had been playing a remarkably similar character over in Babylon 5. His appearance here led to him being killed off-screen over there.

There is also the problem that the episode attempts to push a moral argument about the surveillance state without a lot of ammunition to back itself up. Sisko's father Joseph is disgusted by new laws that force the families of Starfleet officers to be blood-screened to prove they are not shape-shifters. In an admittedly well acted scene Joseph rails against his son, and is so angry in his refusal to be tested that he accidentally cuts his hand with a knife. Sisko sees the blood on the knife, sees his father is not a changeling and then realises with horror he had been worried that he was. The problem with the scene is that Starfleet really has not gone that far. It has not introduced additional security measures against the general public - merely against those who would prove a target to the Federation's enemies. It is difficult to join in Sisko's horror at a security measure that seems eminently sensible.

At the episode's climax, sabotage causes a planet-wide power blackout (do not even start trying to work out how this could happen) and Foxworth's Admiral Leyton convinces the President to put Starfleet officers on every street corner in preparation for a Dominion invasion. Once again the episode plays the moment out like a dreadful suspension of civil liberties. Quite frankly I think it seems a sensible thing to do. The second episode of this two-parter, "Paradise Lost", might push the militarisation of Earth too far and justify Sisko's regrets, but right now that justification simply isn't there.

The episode has bright spots. Brock Peters and Avery Brooks work really well together as father and son. An early scene of O'Brien and Bashir coming out of a Battle of Britain holosuite adventure is wonderfully played. It's great to see Cirroc Lofton and Aron Eisenberg return as Jake and Nog - even if Nog is clearly there to shoe-horn in some plot exposition for part 2. Altogether though "Homefront" is a big of a noisy, portentous non-event. I came away quite disappointed. The core idea is fascinating, but with an idea this big there's a need for a real commitment of time and money, and the storyline gets neither.

Deep Space Nine is 10 episodes into Season 4, and seven have been good. The quality ratio drops to 70 per cent.
Posted by Grant at 5:04 PM