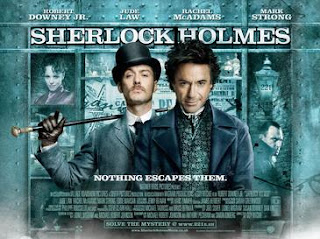 Just as they are on the cusp of going their separate ways for good, consulting detective Sherlock Holmes (Robert Downey Jr) and war veteran Dr John Watson (Jude Law) are brought back together for one final case: the inexplicable resurrection of the occultist and murderer Lord Blackwood (Mark Strong).

Sherlock Holmes, which was released to great commercial success back in 2009, is one of those Hollywood projects that makes so much sense and seems such an obvious idea that the genius was noticing that nobody had attempted it before. Arthur Conan Doyle's Sherlock Holmes stories were the blockbusters of their day, so why not translate the characters into an actual Hollywood action blockbuster? There had been a near-countless number of Sherlock Holmes adaptations made for film before, but I am not sure there had ever been one with as strong an emphasis on action as it did on mystery-solving. It also had the sense to bring in actor just hitting the absolute peak of his popularity (Robert Downey Jr) and to hire a director (Guy Ritchie) who had demonstrated a lot of talent but never had the chance to make a big-budget Hollywood film.

It would be a rational assumption to think that Sherlock Holmes was playing fast and loose with Doyle's most famous fictional creation, since he fits the modern studio film so effectively. He's a master martial artist, giving him the opportunity to feature in a string of chase and action scenes. He is wonderfully over-the-top and eccentric, satisfying an audience desire post-Pirates of the Carribean for more strange and humorous protagonists. He gets to be a little sexy and romantic through encounters with love interest Irene Adler (Rachel McAdams). The truth is that all of these elements pretty much originate in the short stories in one form or another. Doyle never spent much time describing Holmes' fighting other people, but he laid down pretty clearly the detective's martial artist skills. He was also always one step away from a drug-fuelled bender - the film simply pushes him a step or two further into those benders than Doyle did. Adler of course was a character created by Doyle, famously the one criminal who escaped Holmes' detection. It all fits the original works beautifully, yet manages to present them as fresh and contemporary at the same time.

The film employs an original story cribbed from elements of Doyle's work. The real genius of the screenplay is that it pits Holmes against Blackwood, a practitioner of dark arts and puts forward a case that is not logical but supernatural. It initially seems so cynically done, and so stereotypically Hollywood. Then of course events play out that reveal the supernatural goings-on are entirely carefully managed sleight-of-hand and illusion, and Holmes' ruthless logic wins out in the end. The little trick the film plays - to sell the audience on a supernatural story and then reversing it - it immensely satisfying to watch.

Mark Strong is wonderfully charismatic as Blackwood. In a more traditional take on Sherlock Holmes, he would be the perfect pick to play Holmes himself. Strong's appearance here comes in the middle of a prolonged run as Hollywood villains, which saw him play varied antagonists in Sunshine, Stardust, Kick Ass, Robin Hood and John Carter. With his rich speaking voice and piercing eyes he seems hand-made to play the bad guy.

Rachel McAdams makes for a wonderfully breezy and seductive Irene. Her character has been tweaked a bit, based on an assumption that she and Holmes met several times after her one-off literary appearance in "A Scandal in Bohemia". It works incredibly well, and McAdams and Downey's performances bounce off one another beautifully. Kelly Reilly is also strong in the smaller but crucial role of Watson's fiancee Mary Morstan.

If there is a single stand out among the cast, however, it is Jude Law as Dr Watson. For me Watson is the most critically under-appreciated role in Sherlock Holmes adaptations. There was an overwhelming tendency in early film and television productions to present him as a sort of bumbling fool; a character who existed purely to ask Holmes questions and be surprised and impressed at the answers. Law - and the screenplay - plays the character with much more intelligence, authority and depth. He is shown as a competent medical doctor, his past as a war veteran is highlighted, and his ability to keep up with Holmes in terms of action and deduction makes him a genuine partner rather than a credulous sidekick. I still think it is the best role Law has played. He fills it with a simple, engaging charisma. He is to my mind the best on-screen Watson of all time, something Downey does not quite manage with Holmes - for me the late Jeremy Brett remains unsurpassed in the role.

The film is beautifully shot by cinematographer Philippe Rousselot, with a wonderful sense of place for Victorian England. As if often the case it's a glamorised and unrealistic depiction of history, but to its credit it gets a lot grimier and unsavoury than these kinds of nostalgic representations usually manage. Hans Zimmer scores the film with a wonderfully drunken, shambolic series of themes that highlight piano and violin very effectively. It's one of my favourite scores from his long catalogue, and goes a long way to giving the film it's rough, charming aesthetic.

This film seems a particular victory for director Guy Ritchie. He burst into the British film industry on the back of his distinctive and funny gangland caper Lock, Stock and Two Smoking Barrels, and he managed to leverage that film's success into a bigger-budgeted - and much better directed - variation on its themes: Snatch. After that, and despite demonstrating an immense talent for dynamic editing and inventive visuals, he seemed to flounder with poorly made films like Swept Away, Revolver and Rock'n'Rolla. Sherlock Holmes does not simply present a return to form. It is still the best film he has made. He takes all of the techniques, style and tone he presented in his first two films, and re-presents them in their most effective iteration yet.

Ultimately Sherlock Holmes is one of those great studio productions that we thankfully get once or twice each year. It is based on a strong, well-considered screenplay. It has a great balance of drama, comedy and action. There isn't a bad performance among the cast. It has a satisfying climax. It ends with the audience keen to see a sequel - which it received a few years later, and which I shall likely review as well in the next few days. It's a film that I never tire of re-watching.
Posted by Grant at 8:37 PM