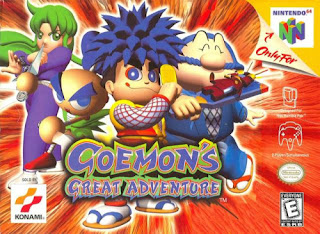 Ganbare Goemon is one of those videogame franchises that has trucked along merrily within Japan but has remained fairly obscure and unknown in the rest of the world. That is almost entirely down to availability. The Goemon character has appeared in almost 40 different titles in his home country, while only five have been released international: one for the SNES, two for the Gameboy and two for the Nintendo 64, all released under the Mystical Ninja title.

Goemon is a character inspired by the folkloric thief Ishikawa Goemon, and stars in a series of light-hearted, slightly silly platform games based around a fantasy-tinged version of feudal Japan. The first Nintedno 64 title was Mystical Ninja starring Goemon, which was a 3D platformer that owed a pretty significant debt to Super Mario 64. While well-designed, a poor localisation job by Konami saw much of its humour fall flat and left many gamers a little confused and underwhelmed. The second N64 title, Goemon's Great Adventure (aka Mystical Ninja 2 starring Goemon), returned to a more traditional side-scrolling platform mechanic, and was much stronger for it.

While the mechanics of the game are that of a side-scrolling platformer, visually it exploits the N64's 3D graphics to give the various stages and environments a pleasant sense of depth. It also allows for two characters to play simultaneously, both running through the same stage together. The game includes a day/night cycle, where the lights fade after three minutes and for the next three minutes all of the enemies are more powerful and challenging to the player. The day/night cycle also affects which non-player characters (NPCs) the player will encounter when entering villages between levels.

The bottom line is that Goemon's Great Adventure is a neat side-scroller released at a time when side-scrolling platform games really fell out of favour. It is difficult to find really good ones on the Nintendo 64. Those that were made were often underwhelming (Yoshi's Story just about scrapes by) or ridiculously simplistic (Kirby 64). This one scratches an itch that needed scratching among all of the Super Mario 64 clones.