The Flash: "Things You Can't Outrun" 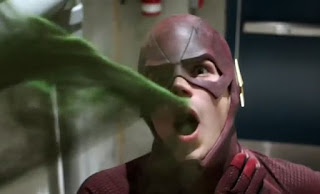 Random victims around Central City are being gassed to death, without any evidence of who committed the murder or how they delivered the gas. Unsurprisingly, it turns out that another metahuman criminal is at work, and it's up to Barry (Grant Gustin) to take him down. At the same time, the growing number of metahumans terrorising Central City brings an important question: where does the team imprison them once they catch them?

I think "Things You Can't Outrun" is my favourite episode of The Flash so far (so basically the best of three). It has fast-paced adventure, some cool visual effects, a bit of character development and a gentle pushing along of the series' various ongoing storylines. While it is fairly simplistic stuff, it has a bright, pleasant tone and some great production values. This is not a perfect television series, but it is an incredibly easy one to like.

This week's obscure DC Comics super-villain is the Mist, aka Kyle Nimbus, who first appeared in Adventure Comics in 1941 as an enemy for the Sandman. I seem to recall his comic book power was simply to assume a gaseous form. The gas being cyanide-based and toxic to humans seems to be an invention of the TV series. Anthony Carrigan is wonderfully creepy in the role, and seems a much more visually striking antagonist than either Multiplex or the Weather Wizard-esque bank robber of the pilot. Unlike the other two villains to date he also gets to live to see the end of the episode, which means he is a potential returning antagonist in future weeks or seasons.

I am slightly uncomfortable about the Flash team's plan to start imprisoning captured metahumans inside a converted particle accelerator. The last we see of the Mist is his screaming incorporeal form banging against the walls of a small glass cupboard. How does he breathe in there? How do they feed him? Where does he poop? What about his rights, or due process? It feels like a massive criminal abuse of human rights just got started, and none of the characters seem too worried about it. Perhaps they will deal with it soon. Right now it feels logically improbable and morally repellent.

It's nice to see the episode continue pushing the characters along. Joe West (Jesse L. Martin) now believes Barry's father Henry (John Wesley Shipp) to be innocent of killing his mother, and during the episode's climax Henry even gets his first glimpse of the Flash in action. Eddie Thawne (Rick Cosnett) and Iris West (Candice Patton) finally tell Joe they are dating. Harrison Wells (Tom Cavanagh) is revealed to have deliberately engineered the breakdown of the particle accelerator to bring the Flash into being. It is looking pretty clear to me that Wells is going to be revealed at some point to be the villainous Reverse Flash - time will tell, but that's where I would take things were I looking for good material from the comics.

Speaking of material from the comics, Caitlin Snow's dead fiancee Ronnie - mentioned previous and seen in flashbacks here - seems pretty much set to be Ronnie Raymond, aka second-string DC hero Firestorm. I expect to see him resurrected with his head on fire in due course. His presence here fills out Caitlin's back story nicely, and she gets to share some solid dramatic scenes with Barry that work very well. I have not been a huge fan of the character so far, since she seems to simply copy the 'skinny pale geek girl' trope that has plagued American genre television since Joss Whedon created Willow. She was actually reasonably good here, pretty much because a solid actor (Danielle Panabaker) was finally given useable material with which to perform.

Overall this is a fun episode with only a few reservations. This is unashamed comfort television: a little bit dramatic, a little bit funny, visually engaging and not too complicated. It marks two good episodes out of three so far, and a quality ratio of 67 per cent.
Posted by Grant at 10:49 PM