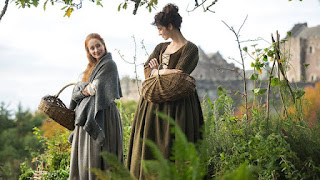 Former army nurse Claire Beacham (Catriona Balfe) has been transported back in time from 1945 to 1743 Scotland, where she has been rescued from English redcoats by a group of Jacobite rebels. Now a guest in the nearby Castle Leoch, Claire must use her wits to ensure she is not imprisoned as an English spy - or even accused of being a witch.

Before anything else it is worth appreciating just how effectively "Castle Leoch" explores the experience of travelling back in time. The initial panic, the confusion and the sheer terror of it is well played by both the script and Catriona Balfe's performance, but also the steely resignation that comes when Claire accepts that she has indeed slipped back 202 years and that without careful consideration of her words and action she is likely to die at the end of a knife, a rope, and on top of a fire.

Claire's acceptance of her predicament is expressed perfectly in a scene where Mrs Fitz (Annette Badland), the castle's chief maid, undresses Claire out of her ragged, dirty 1940s dress and into appropriate 18th century attire. It's a beautifully shot sequence inspiring very mixed emotions: relief at now being able to blend into castle life, and grief at the loss of the last vestige of her 1945 identity.

There are many other highlights to the episode. Gary Lewis is impressive as the polite yet suspicious Clan Laird Colum McKenzie. The character benefits from well-executed visual effects to give him his crippling Toulouse-Latrec syndrome, which painfully bows his legs and ankles and causes him to hobble through his castle with an awkward, self-aware gait. The character is particularly strong when he plies Claire with wine over dinner while elegantly needling her for gaps in her story. The scene itself is not quite as effective, relying too much on momentary flashbacks and an unnecessary voiceover by Balfe. I had hoped the voiceover would be diminished in this second episode, but it continue apace and continues to be somewhat tedious.

There is an excellent sense of place. Characters openly speak Gaelic to one another without subtitles, so that like Claire we have to stumble in the dark a little as to what people are saying. Even when speaking English the dialogue is peppered with Scottish colloquialisms and turns of phrase. The sense of time and place is pretty wonderful, with only Bear McCreary's score over-doing it with a score drawing liberally on Scottish traditional folk music. It's hard to miss the snatches of "Loch Lomond".

The rest of the episode is a fairly uneven affair. Claire grows closer to the dashing young highlander Jamie Fraser (Sam Heughan), who once again shows off both his noble spirit and well-chiselled pectoral muscles. He tells her some of his backstory, including being fiercely whipped and his sister raped by the monstrous Jack Randall (Tobias Menzies). It is a story that would have been best told verbally by Heughan, but director John Dahl goes for a confronting flashback instead. Sexual assault is a thorny, triggering thing in film and television. While it can have a valid place in dramatic stories, it's something that needs to be used very responsibly. This episode feels like it has crossed a line, and comes across as lurid rather than provocative. It feels eyed upon by a patriarchal gaze.

The scene is doubly unfortunate because an earlier conversation between Claire and Colum has her explaining she was almost raped by Jack Randall. Colum questions the believability of a king's soldier raping a woman in the woods 'without good reason'. 'Is there ever a good reason for rape, Mr McKenzie?' replies Claire, in what must surely be one of the most applause-worthy moments in recent television. To go from such a strong feminist challenge to a leery display of a half-naked woman on her way to be assaulted is not pleasant.

The episode ultimately succeeds in small moments and brief scenes, and in its introduction of a raft of fairly appealing characters. Not just Jamie and Colum but also Colum's brooding brother Dougal (Graham McTavish), cousin Rupert (Grant O'Rourke) and the mysterious and slightly creepy red-haired Geillis (Lotte Verbeek). By its end Colum, seemingly on Dougal's advice, has decided to keep Claire a prisoner in the castle until he can determine if she is a threat to him or not. The scene for the series appears set, and the cast has been established. I do wonder if these first two episodes might have been better presented as a single double-length presentation: the structure would have been much better, and the story would have flowed more enjoyably. Despite some issues with the series - notably the annoying voiceover and the growing record of successful and attempted sexual assaults - I am quite enjoying this series. It's beautifully shot, very well acted, and presented a rather different style and tone to the usual sort of time travel story on film or television.
Posted by Grant at 6:47 PM