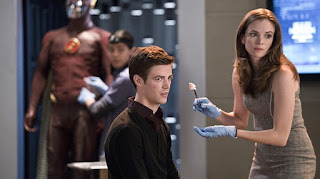 Barry Allen (Grant Gustin) begins using his super-speed to help those in need, but soon finds himself suffering dizzy spells and fatigue. He has little time to rest, however, after encountering a second meta-human: in this case a murderous scientist named Danton Black (Michael Christopher Smith) who can split his own body into multiple clones.

"Fastest Man Alive" feels a lot more relaxed than the slightly shaky pilot. It has a defined and clear purpose, and goes about its business in an efficient and effective manner. It is still a fairly superficial and breezy sort of a series, but for now at least The Flash seems content to throw super-powered villains at an appealing protagonist on a week-by-week basis, and not too much else.

That's okay: there's definitely a place for this kind of populist, non-taxing adventure show. It's enjoyable stuff, and not too taxing, and Grant Gustin goes a long way to making it all a pretty entertaining hour of television. It's also manna from heaven for hardcore DC Comics fans.

This second episode doesn't seem quite as packed with sly nods and continuity references as the pilot, but it does introduce Multiplex. He was originally a villain in Firestorm back in the late 1970s before joining the cast of Suicide Squad. He is not a top tier villain. He's not even a second-rate villain. He's one of those minor also-rans that the hardcore might recognise - but he's unlikely to be anyone's favourite. The fact that such a minor character would be fulled from the comics and thrown into the TV series says a lot about how The Flash intends to use its source material. It can only be a matter of time before Polka Dot Man turns up. Or Calamity King.

The use of an obscure comics villain actually pleases me greatly, since there does not seem much point going to all the trouble of adapting a comic book to television if you are not going to take all of the toys in the toybox. I look forward to a lot more references, characters and storylines getting adapting in the episodes ahead.

The main characters generally progress and settle down in much the same manner as they were presented in the pilot. Gustin is a genuine stand-out. Jesse L. Martin is solid as Police Detective Joe West. Candice Patton continues to be unconvincing and weak as his daughter Iris. Tom Cavanagh is great as Harrison Wells, who two episodes in a row now has demonstrated himself to be a lot less friendly and trustworthy than Barry believes. It's pretty clear now that Wells is the character to watch for when the season's overall story arc comes into play.

"Fastest Man Alive" is solidly enjoyable popcorn entertainment, and a much stronger kick-off to the series. Hopefully things continue to improve. I really want them to: it's great to have the Flash on television again. Two episodes in, and the quality ratio hits 50 per cent.
Posted by Grant at 7:18 AM