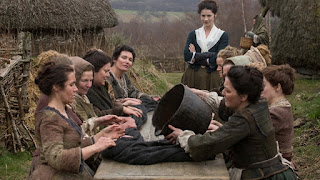 Claire (Catriona Balfe) is sent on the road to provide medical assistance to Dougal (Graham McTavish) and his men as they travel the McKenzie lands to collect rents from the people. At first she suspects Dougal of defrauding his older brother, Laird Colum McKenzie, but then she realises that Dougal is working from a different motive - and an entirely new problem becomes clear.

After three episodes within the confines of Castle Leoch it is quite refreshing for Outlander to get on the road itself and stretch its legs. It's an excuse for the series to show off some absolutely beautiful Scottish scenery. It may seen a weak reason to recommend a series, but Outlander really does showcase the Scottish landscape in a manner better than any other TV or film production I've seen before. (Braveheart, for example, was mostly shot in Ireland.) The Scotland Tourism Commission must be loving the series.

Asides from the pretty visuals, "Rent" also introduces what I suspect will be a key plot driver for the series over not this season but the next two or three - the Jacobite uprising against George II.

Very briefly, because as with most historical matters there's a lot more complexity and nuance that I can probably squeeze into a TV episode review: the Jacobites were a movement of British people who believed the deposing of King James II in 1688 was illegal, and were intent upon restoring a legitimate Catholic king to the British throne. In Scotland, and at the time of Outlander, the Jacobites specifically worked towards placing Prince Charles Stuart on the throne in place of the Hanoverian kings. It all climaxed in an attempted invasion by Charles that was ultimately crushed - bloodily so - by the English army at Culloden in 1746.

Claire begins the episode thinking Dougal is squeezing extra money out of the peasantry to line his own pockets, but halfway through has the epiphany that what he's actually doing is raising funds for a Jacobite army. That completely changes her attitude to him and his men, but it also makes her conflicted as she now realises most of the men she is growing to like will be dead on Culloden Moor within three years. Should she warn them, or let history take its course? This is all an excuse for great character drama. Claire's relationship with the McKenzies changes, but her sudden concern their Jacobite cause is futile immediately throws her back under suspicion. It is all very well performed and written, and thankfully there's not a threat of sexual assault in sight this hour. That is something of a relief.

Of course there remains the elephant in the room, which is that only one episode ago Dougal did drunkenly try to assault Claire. It's not referenced here, as if the series' writers and producers simply don't want their audience to think about it. I think Catriona Balfe has. Her visible panic when she goes to wash herself at the river at the episode's climax, only to be surprised by Dougal, speaks volumes.

It is nice to see Claire relax into Scottish life in this episode. She sets dye into cloth with a group of peasant women, and gets drunk with them. She's picking up odd bits of Gaelic. She finally manages to break through with Dougal's men and be accepted more warmly by them. She finds a new friend in the clan lawyer Ned Gowan (a very welcome Bill Paterson). It all achieves two goals: firstly, it does progress her character nicely and lets the audience relax along with her; secondly, it makes the episode's cliffhanger ending all the more effective. Just when Claire has finally gained the trust of the McKenzies, a squad of English soldiers arrive to rescue her from captivity.

It is a wonderfully tense cliffhanger, because I honestly don't know what is going to happen next. This episode and "The Way Out" before it, have been the two stand-outs of the season so far. I would really appreciate more episodes like this and less like "The Gathering". The quality ratio rises up to 80 per cent.
Posted by Grant at 11:09 AM