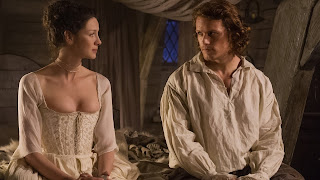 In order to keep Claire (Catriona Balfe) out of Captain Randall's clutches, Dougal (Graham McTavish) has ordered Jamie (Sam Heughan) to marry her. This is something of a problem for Claire, since she already has a husband whom she loves back in 1945, but with Randall's threats looming over her head she does not have a choice.

"The Wedding" is a striking hour of television. I spent the entire episode on edge, not because of what was happening on screen but because the previous six episodes had led me to assume something dramatic and terrible was going to happen at any moment. I was anticipating Randall turning up and kidnapping Claire. I was anticipating murder. I was anticipating yet another attempt at a sexual assault. Instead I got two strangers, recently married, properly meeting one another for the first time. It was extraordinarily effective.

The episode begins with the wedding already complete, and Claire and Jamie heading up to their bedroom at a local inn. There is an expectation for them to have sex, in order to bind their marriage properly and ensure Claire becomes a proper member of the McKenzie clan and thus unavailable to Randall. A terrified Claire takes to drink, and a nervous Jamie - who is a virgin - happily joins her. Over the following hour they finally get to know one another, and we see their wedding and its preparation through a series of flashbacks.

As their night progresses, however, the real nature of Claire's nervousness becomes clear. For Jamie it is fairly transparent: he clearly loves Claire, and has never been to bed with a woman, and as a result carries all of the nerves and worries you would expect. It's very different for Claire. Initially you might think it is because she is thinking of Frank back in 1945, and does not want to go through with this second marriage back in 1743. In truth she does want to go through with it. She does want to have sex with Jamie. For Claire the episode is largely about giving herself permission to enjoy his touch. She clearly has feelings for him, and she is visibly attracted to him. At the same time she hardly knows him: a flashback to their wedding shows him telling her his full name for the very first time.

I am usually quite dismissive of sex scenes in American television drama, because it is usually narratively redundant and presented from an aggressive male gaze. The sex in "The Wedding", and there is a surprisingly large amount of it, actually feels justified. It expresses character and builds the relationship between Claire and Jamie in intelligent ways. It is also much more evenly presented, with camera angles not really favouring one character's nudity over the other.

Things get mildly unpleasant towards the end, as Claire has an unwanted late-night encounter with the still-amorous Dougal. I've been troubled by his character since he tried assaulting her some episodes back. Since then the series has been frustratingly non-committal with him. Are we supposed to like or hate him? Here he's attempting (badly) to seduce Claire on her wedding night, which makes it pretty easy for viewers to hate him going forwards. McTavish does a great job with the character; he's remarkably complicated and difficult.

Altogether this is a wonderful episode. It slows things down, and concentrates on two characters connecting with one another. After the tension of "The Garrison Commander" it is a really welcome change in tone and pace. It takes a difficult part of Claire's story - getting married to Jamie when she is already married to and in love with Frank - and plays it out very carefully.

Back in the 1990s there was a British situation comedy titled Goodnight Sweetheart, about a man from the present day who found a way to slip back in time to the 1940s. He ultimately married someone back in the past, despite being married in the present day, and to a large extent to series was a creative failure because it was impossible to like the protagonist. He was an unrepentant bigamist, lying to two women, and the series was less interested in interrogating his actions than in making weak jokes about it. Outlander avoids that problem by tackling it head-on. The episode ends with Claire on her knees in the bedroom, Jamie's wedding ring on the finger of one hand, and Frank's wedding ring on the other. Her faces speaks volumes. So much regret. So much guilt,

I've generally enjoyed Outlander but with this episode it made a visible leap from being good television to being great television. I hope this continues. Seven episodes into the series, and six of them have been good. The quality ratio rises again to 86 per cent.
Posted by Grant at 9:36 AM