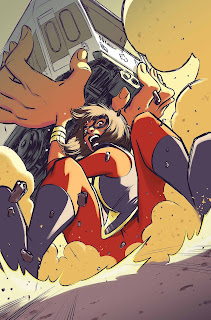 After throwing Hydra out of New Jersey, Kamala Khan understandably can't wait for a little down-time. Instead she seems busier than ever: there are classes to study for, a brother getting married with his wife moving into the Khan household, and yet more crime-fighting to be done on behalf of the Avengers. She seems to have hit upon a solution, but it's clear that the solution is going to be much, much worse than the original problem.

Marvel do a really good job when finding fill-in artists. Guest artist Nico Leon has a style that is very similar to Adrian Alphona, and as such the book continues on in such a smooth and seamless manner that a lot of readers probably won't even notice the change.

G. Willow Wilson's writing continues to flawlessly present Kamala and her life. This issue presents exactly the sorts of qualities and content that have made the book so enjoyable. Wilson balances the superhero elements of the comic with the high school drama, and always manages to throw in quite a lot of well-observed and funny humour at the same time. Kamala is such an adorable character. I think she is almost impossible to dislike - much like this comic. If you read Ms Marvel and don't enjoy it - why are you reading superhero comics at all? (5/5)

Under the cut: reviews of Batman, Batman and Robin Eternal and Darth Vader.

Jim Gordon has been taken out by the villainous Mr Bloom - he may even be dead. Bruce Wayne has arrived at Wayne Manor on a mission: to become the Batman again. He cannot remember how, but he knows that Batman would have left the means of making him remember. So for about a year now Bruce Wayne has been a happy amnesiac while Gordon has taken over the mantle of Batman. Now the original is coming back, and just in time for issue #50. It's a solid issue, but to be honest it feels like I should be more impressed with it than I actually am. Something makes this issue fall very slightly flat, whether it's the presence of temporary co-writer James Tynion IV or guest artist Yanick Paquette, or maybe that there simply isn't enough plot here to really fill out 20 pages. Whatever the reason, this is one of those issues that should be legendary and instead it's merely enjoyable. (3/5)

Mother's plan comes to fruition as the entire Spyral academy falls victim to her near-unbeatable mind control. It's up to Batman's team of current and former sidekicks to save the day - even as both Tim and Harper fall victim to her plans. Much like Batman above, this issue is solid but does not have the impact that these scenes should probably have. Paul Pelletier and Tony Kordos' artwork is strong though, and it does definitely push the story along. With only seven issues to go, however, it feels as if things should be pushing along a lot more than they are. (3/5)

His most recent encounter with Luke Skywalker over and done with, Vader returns to the planet Shu-Torun, where the ore masters who mine its precious minerals have dared to resist Imperial rule. This issue snaps back to the exact sort of calculated and merciless carnage that has typified the book over its first year. Kieron Gillen has a tremendously strong handle on how Vader acts and reacts, including wonderful stony silences as well as blunt, harsh dialogue. The issue's final scene is worth the cost of buying the book alone, but it is all wonderfully dark and entertaining stuff. I really like how this issue follows up on events in the Darth Vader annual, turning it from a pleasant but unnecessary side adventure into a prologue to the main book. This isn't just one of the best licensed titles out there; it's one of the best books Marvel is currently publishing. (5/5)
Posted by Grant at 6:39 PM