Outlander: "The Way Out" 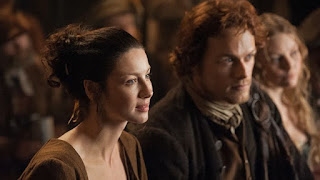 1940s nurse Claire Randall (Catriona Balfe) is trapped in 1743 Scotland, where the Laird of the clan McKenzie has imprisoned her in Castle Leoch and its surrounds out of fear she may be an English spy. While biding her time Claire connects with the enigmatic herbalist Geillis Duncan (Lotte Verbeek), continues to flirt with the dashing Jamie Fraser (Sam Heughan) and in saving a poisoned child's life earns the ire of the fire-and-brimstone priest (Tim McInnerny).

Thankfully Outlander's third episode skips any implied or threatened sexual assaults, although in return it does give us the spectacle of a 12 year-old boy having his ear nailed to the pillory. Asides from that it is a rather comfortable affair, settling Claire into 18th century life and further exploring the various characters living out their lives around her. There are a few glimmers of genius, but generally speaking this is a fairly amiable historical drama.

The real stroke of genius here is Geillis. She popped into the series briefly in "Castle Leoch", talking to Claire in weirdly guarded sentences and roundabout insinuations. It was clear from the outset she was not exactly what she appeared: ostensibly a herbalist who assisted local women with their abortions, but she dropped in mentions of knowing how to murder people, and suspicions others had of her being a witch, and so on. In this episode she needles Claire for the truth behind who she is and how she found herself in Leoch, and it is during this fairly insincere and roundabout conversation that the penny drops: Geillis is a time traveller as well.

Of course this is all wild suspicion on my part, but I will be both surprised and disappointed if it turns out not to be true. It all makes a kind of sense: a mysterious woman unlike those around her, married to a much older, fairly repellent man for safety, who is terrified that someone will find her secret and burn her for heresy or somesuch. Seeing Claire is visibly giving her hope, but she cannot reveal herself for fear of being wrong - and then it's potentially back to getting burned at the stake, or beaten to death with rocks. So Geillis talks in circles, and goads Claire into admitting her origins - thus far without much success - and dropping bigger and bigger hints in the hope that Claire will get the message and open up to her.

A folk song performed late in the episode bears this theory out, as its lyrics refer to another woman magically sent by the standing stones to 'another land'. Paired with my suspicions about Geillis and this really brings Outlander up to a whole new level. Thus far the series has used time travel as an excuse for a romantic historical adventure, with the initial sense that Claire's experience was unique. If it is not, one wonders just how many people might have wandered into historical Scotland from the future. It opens up enormous opportunities for the series going forward, and I really hope it leads somewhere. It got me rather excited.

Elsewhere the episode develops in a much more traditional and expected fashion. Claire cures a boy who has been poisoned, only the local priest was intent upon exorcising the boy of demons and thus informs Claire she has the whiff of Satan about her. This can't end well, and to be honest it's a story development I have been expecting since this series began. Tim McInnerny is great in the role, playing a very broad and one-dimensional character with just the right amount of dour severity to make him believable. During the episode Claire also gets jealous of Jamie romancing a local girl, which feels a little bit weak. Also unwelcome is the constantly redundant and intrusive voiceovers. I assume at this point they are here to stay, which is a pity since they only weaken the drama when they appear.

The episode ends with Claire freshly resolved to return to the stones and, hopefully, the 20th century. Characters have been fleshed out some more, and some new intrigue has been added to the mix. I think this is my favourite episode so far. Despite some fairly big reservations on the earlier episodes' use of sex, nudity and sexual assault (none of which, I notice, was in evidence this week) I am really enjoying Outlander. Its quality ratio is rock-solid at 100 per cent.
Posted by Grant at 9:57 PM