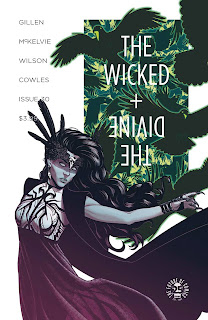 For those who came in late: every 90 years a group of young humans suddenly manifest supernatural powers and are reincarnated as Gods. This "Pantheon" then shines brilliantly for two years before they all die. The only constant element appears to be Ananke, an immortal and hugely powerful figure who turned out to have been murdering the Pantheon every cycle to avoid "the great darkness". This time around the Pantheon got there first, Ananke is dead, and now what the great darkness is is rapidly approaching. No one can agree on what to do, one of the Pantheon - Sakhmet - has murdered a bunch of people, and is hiding out from her fellow gods with Persephone, who was a fan of the Pantheon before being reincarnated as one of them.

Sure it sounds a little confusing, but that's what you get if you come in at issue #30. If you have never read The Wicked + the Divine before, go hunt down the first few trades: it's a regular four-to-five star comic book and is a worthy read.

This issue is dominated by Dionysus and Morrigan having a conversation in the dark. It sounds a little dull but it's an important conversation. This really all feels like a calm before a storm, and with the characters all getting developed up to a critical point it suggests that the next few issues are going to be pretty apocalyptic. I do think we're reaching a point where, after 30 serialised issues, it's becoming difficult to keep the characters and the storyline all set in my head with month-long gaps between instalments. A re-read of earlier arcs may be in order before long. (4/5)

Under the cut: reviews of Action Comics, Batgirl and the Birds of Prey, Harbinger Renegade, Hulk and Ms Marvel.

Superman investigates the latest attacks by Machinist, which leads him straight to Lex Luthor - and another reluctant team-up between the former enemies. This issue dives into the action very abruptly, and really never feels anything more than frantic, superficial action. With Rob Williams and Guillem March on creative duties, it feels rather like a fill-in - I expect in an issue or two Dan Jurgens and Patch Zircher will be back and the broader story arc will be back on track. As it stands this issue is okay, but hugely disposable. (2/5)

Batgirl and the Birds of Prey #13

The Birds of Prey, joined by Catwoman, break into a biotech company to save its corrupt lead researcher from getting killed by Poison Ivy. It all feels remarkably rushed and perfunctory, to be honest, and a sharp change in art team halfway through feels very jarring. Altogether it feels terribly rushed, and certainly far from this book at its best. Even the characterisation feels superficial and almost arbitrary. Everyone involved has done, and hopefully will return to do, much better than this. (2/5)

In a special one-shot interlude, a knight in the 11th century goes to war against a powerful evolved human with psychic powers (known as a Psiot in the Valiant Universe). I have not been following Harbinger Renegade, so I decided to treat this as a self-contained one-shot and see how it went going in cold. It's pretty great stuff: the star here is Ryp, who gives an epic medieval siege a huge amount of weight and energy. Andrew Dalhouse's colours accentuate it all brilliantly. If you're hankering for a nice blend of medieval war and horror, this will scratch that itch wonderfully. (4/5)

An Internet celebrity chef has been slipped a mutagenic agent in a foolish prank, and is on the run across New York on the hunt for a cure. Meanwhile Jennifer is attempting to track him down before he causes any more harm to others. I am realy enjoying Mariko Tamaki's take on She-Hulk in this book, using survivor's guilt and rage and expressing them through a superhero story. I particularly like how warm the characterisation is: in this issue it's not just Jennifer but her sometimes partner Patsy Walker. Their friendship rings true, and feels very sweet. (4/5)

A super-villain has become mayor of Jersey City, and an armed militia has started rounding up Inhumans and locking them in detention. In steps Kamala to save the day, although of course being Ms Marvel the end result eschews action in favour of angst, ethical dilemmas and interpersonal relationships. It is what makes Ms Marvel such a strong comic book: it always feels as if it is actually about something. Marco Failla's artwork continues the strong aesthetic this book has enjoyed since it started. It's all great stuff. (4/5)
Posted by Grant at 5:10 PM