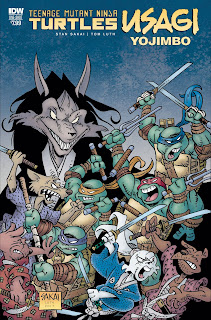 Usagi Yojimbo and Teenage Mutant Ninja Turtles have always had a fairly close relationship: both independent black and white comic books of the 1980s, they crossed over fairly quickly and Usagi has been an intermittent presence in the Turtles comics and television cartoons ever since (right up to an appearance in the current series a few weeks ago).

This new one-shot is a real gem: written and drawn by Usagi creator Stan Sakai, with absolutely beautiful soft colouring by Tom Luth. The story itself is relatively straight-forward, but as is often the case with Sakai it is told in a very simple and elegant fashion with some absolutely beautiful art.

I feel the market does not give Usagi Yojimbo the respect it is due: it is rarely sensationalised or attention-grabbing, but Sakai does a flawless job with every issue he creates. It has a warm, likeable tone, a strong sense of Japanese history and culture, and a cartoon-like sensibility that is much harder to produce than it looks. It is such a pleasant read every time. Hopefully this crossover might bring a few new readers to Sakai's work. He deserves them all. (4/5)

Under the cut: reviews of All-Star Batman, Doctor Aphra and Doctor Who: The Eleventh Doctor.

"The First Ally" continues, splitting its narrative between Batman's current adventure and Alfred's military past. It's beautifully illustrated by Alberquerque, and the action is well developed and dynamic, but there is something about the story that feels slightly off. It is giving Alfred much too interesting an origin - as if he is suddenly a former action hero, and that does not quite sit right in my head. It also features Hush as a villain, which no reader in their right mind should want, should they? (3/5)

Aphra continues receiving bids from an eclectic group of galactic criminals, all bidding for the preserved AI of an ancient Jedi. Last issue ended with her traitorous droids contacting Darth Vader - who believed he had killed Aphra some months ago. This gives the whole of this issue a sense of tension, as the reader waits for Vader to show up and have a second go of it. In the meantime there's a nice blend of humour and intrigue as the various bidders make their offers. It is wonderfully entertaining stuff. (4/5)

Doctor Who: The Eleventh Doctor #7

The Doctor, Alice and the Sapling are on the run through a ship full of memories, with the memory parasites known as the Thrakes in hot pursuit. This issue is kind of dull. I wish there was something more constructive to write about this issue, or indeed this whole volume of 11th Doctor adventures. For some reason this third year of the series has felt weirdly off-key and uninvolving, to the point where I'm pondering dropping the book entirely. I.N.J. Culbard's artwork continues to have a nice simplicity to it, but the story simply isn't there. (2/5)
Posted by Grant at 11:36 PM