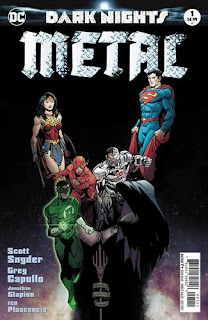 Talk about a mixed bag. Dark Nights: Metal has been teased and prologued by DC Comics for months - years, if you believe writer Scott Snyder - and now that it is here I am almost incapable of describing how I feel about it. It certainly represents Snyder at his most gleefully unbridled. No idea, it seems, is too 'out there' or off-the-wall for this miniseries.

The series introduces an alien invasion from the 'dark multiverse', one thousands of years in the planning and always intended to use Batman as its way through into the DC Universe (calculate that one yourself). It incorporates the Justice League turning into, well essentially Voltron, as well as returning characters like Red Tornado, a wingless Hawkgirl, and the Sandman.

No, no that Sandman. The 1940s superhero might actually have made sense. No, this first issue caps off its insanity with Batman confronted by Daniel of the Endless, protagonist of Neil Gaiman's widely acclaimed fantasy series The Sandman. DC has already dragged Watchmen into its big over-arching line-wide story arc; now it seems no Vertigo characters are safe. I for one can't wait for the arrival of Jesse Custer, King Mob and V by the time this whole crazy escapade is complete.

There are bit in this issue I adored. There are bits that made me want to scream. How do you review a comic book like that? (3/5)

Under the cut: reviews of Batman, Doctor Who: The 11th Doctor, Spider-Men and Uncle Scrooge.

Bruce Wayne draws up a truce and invites the Joker and the Riddler to dinner. It's a tremendous issue, with a beautifully formal structure divided by the courses of a full French traditional banquet. Mikel Janin's artwork is superb, and reveals wonderful little tics and details in each character's face. It digs into each character as well, presenting fresh facets and angles on each of them. It may very well be the best single issue of Batman that Tom King has yet written. (5/5)

Doctor Who: The Eleventh Doctor #3.8

The Doctor, Alice and the Sapling entertain themselves at a Renaissance Fair - until people around the fair begin to lose their memories. This is a rather pleasant done-in-one storyline. It is unlikely to set anybody's world on fire, but it entertains and certainly does a great job of capturing the Doctor's personality. I am still not sold on the Sapling itself; it's a vaguely annoying character and tonally jars with how I think of the 11th Doctor era. (3/5)

Miles Morales and Peter Parker have returned to the site of the inter-dimensional portal that enabled them to first meet. There they find the Taskmaster, and he mentions a name that sets a whole mystery off in motion. This is top-grade Spider-Man adventure from two of the best talents to ever work with the characters. The dialogue snaps and pops, the action is well paced snd brilliantly illustrated, and the mystery is rich with potential. This is a really worthy follow-up to the original Spider-Men. (5/5)

There's something dreadfully old-fashioned about IDW's Uncle Scrooge comic. Then you look at the dates on page 1, and realise that it's because some of the storylines published in this issue are 41 years old. That's not necessarily a bad thing: this comic reprints European Uncle Scrooge strips for the first time in English, giving Disney fans a chance to see some of the vast array of comic material that's been published over the decades. The lead storyline, in which Donald and his nephews are tasked with guarding a chicken coop, is actually pretty entertaining. The two back-up strips are a bit ordinary. (3/5)
Posted by Grant at 9:20 AM