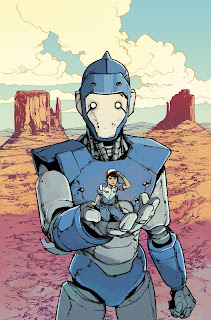 Stanford Yu works as a young janitor at an elite academy for giant robot pilots. On the appointed day, when three alien giant robots are supposed to descend and accept their pilots, one fails to show up. When Stanford finds it damaged a few miles down the road it does the unimaginable and accepts him as its pilot instead.

Mech Cadet Yu is a four-issue miniseries from writer Greg Pak and artist Takeshi Miyazawa. It pays tribute to Japanese pop culture, particularly all of the giant robot anime productions that have been produced since the late 1970s.

The pedigree of its creatives is pretty high for anybody who's been reading Marvel comics: Pak did a sensational extended run on The Incredible Hulk, while Miyazawa has done superb work illustrating Ms Marvel in recent years. If anything it unfairly raises expectations. This is a pleasantly enjoyable first issue, but so far there is nothing that leaps off the page or makes the most significant impression. It's simply an enjoyable giant robot story; and there's absolutely nothing wrong with that. (3/5)

Under the cut: reviews of Batman, Darth Vader, Green Arrow and Superman.

The flashback nature of the "War of Jokes and Riddles" storyline hurts this issue. It deals with mass casualties and terrible violent acts, but it all occurs in retrospect. It pushes a barrier between the reader and the action and reduces the emotional impact. Nowhere is that clearer than it the account of a five-day duel between Deadshot and Deathstroke: it should be an incredibly tense event, but here it is reduced a slightly busy-looking double splash page. So much potential wasted. It is enjoyable, but it feels it should be outstanding. (3/5)

Vader travelled to Al'doleem in search of a Jedi to kill, Master Kirak, but found himself broken and thrown down a ravine for his troubles. Now he fights back. This is the first issue of Charles Soule's run of Darth Vader that really feels on par with Kieron Gillen's original. The bottom line is that a Darth Vader-centric comic is for readers who want to see a bad man do over-the-top villainous things, and be generally quite scary. This issue manages that, and then some. (4/5)

Oliver's fight against the Ninth Circle brings him to Metropolis, and an emergency meeting with Lex Luthor. Meanwhile Superman struggles with a sudden spate of attempted suicides. This is a brilliantly plotted, largely done-in-one issue with some inventive panel layouts, great use of guest characters and Juan Ferreyra's now-standard rich colours and evocative artwork. One thing the issue really nails is Lex Luthor: in his current position in the DC Universe he's a marvellous sort of semi-hero that has retained his villainous characteristics. There's huge amounts of arrogance, but an intelligence to match it. Percy's done a fabulous job with him, making this the most entertaining issue of the "Hard-Travelling Hero" storyline to date. (4/5)

Lois, Clark and Jonathan continue their vacation visiting historical sites around the East Coast of the USA. Clark does occasionally slip into his Superman gear, but it's always for relatively small, minor things. There's no villain to be found here, no dreadful plot to rule the world, or extra-dimensional invasions. Just a family appreciating American history, and the sacrifices made to create the nation. This stuff is hugely sentimental, and a really surprising change of pace for the book, but given the tumultuous year the USA is suffering in 2017 it also feels like a really wonderful reminder of what America could be if it rediscovered its way. Despite the lack of Superman action, this feels like one of the most authentic Superman comics I have read. (4/5)
Posted by Grant at 3:25 PM