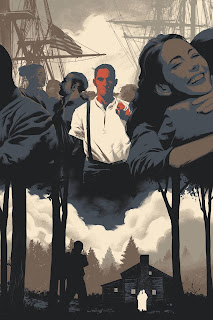 John Abbott has designed and built the ships that won America its naval war against the British, but an act of mutiny to win a battle now sees him imprisoned for treason. An infection has cost him an arm. With peace settled, Nicholson travels to the White House to beg for John's freedom.

These Free and Independent States has been an exceptional miniseries, using the historical background of early American history to tell the story of a difficult man living in a difficult time. Brian Wood has developed a subtle and deeply affecting character in John Abbott, whose obvious autism in an age that knows nothing of the condition constantly disrupts and damages his life.

There is a gentle quality to this issue. It is there is Wood's carefully paced story, and certainly in Andrea Mutti's matter-of-fact, beautifully composed pencils and inks. It is particularly evident in Lauren Affe's colours: all muted and subtle, allowing the narrative to unfold without distraction but with beautiful enhancement.

This appears to mark the end of John Abbott's story, but Rebels continues in August with a self-contained issue focused on George Washington. I love that Wood and Mutti take the opportunity to explore these side stories. They did the same thing with the original Rebels series too. (5/5)

Under the cut: reviews of Ghostbusters 101, The Power of the Dark Crystal, and Saga.

To be honest at this stage there isn't much to say about Ghostbusters 101 that hasn't already been said. It blends the casts of both the 1980s and 2010s Ghostbusters teams. It is packed with pleasing continuity references for the hardcore crowd, and has a relatively smart plot to go with it. The humour is constant and strong. Dan Schoening's caricature-like artwork captures the overall tone of the films very well. As with most tie-in books, it's there primarily for the fans, but if you are one of those fans this is well worth reading. (4/5)

The Power of the Dark Crystal #5

While Kensho is confronted by Jen and the Gelfling soldiers, Thurma is on the run with the crystal shard - and the Skeksi Chamberlain in hot pursuit. It is the first plotline that appeals the most, bringing in some fresh elements and feeling like a genuine progression from the original Dark Crystal film. The second plotline, with the Chamberlain once again sneaking after a rogue Gelfling - albeit a new variation of one with magical fire powers - feels a little too familiar and repetitive. All up, for fans of the film it is a wonderful tribute and follow-up. The art by Kelly and Nichole Matthews is wonderful. (4/5)

Alana and Marko's second child has died in Alana's womb, forcing them to seek medical assistance to have it safely removed. While the baby is inside her, however, Alana is gifted with the magical powers of Marko's people - in this case a future apparition of the child that would have lived. That is all gut-wrenchingly horrible and upsetting stuff, so why is this issue so heartwarming and oftentimes quite funny? Brian K. Vaughan is a superb writer, and Fiona Staples a hugely imaginative and effective artist. Occasionally it takes an issue like this to remind one just how much we're all taking their talents for granted. Saga is one of those books that when everything lines up correctly, the whole thing sings. (5/5)
Posted by Grant at 9:12 AM