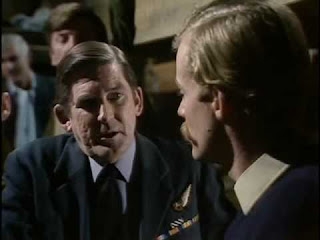 It is 25 February 1974, and time for another episode of Colditz.

Flight Lieutenant Jack Collins (Ray Barrett) arrives at the castle, immediately setting up a regular card game with some of the other British prisoners. He cons and cheats Captain Brent (Paul Chapman) out of his entire life savings - including his family house - and does the same to a German guard as part of an independent escape attempt.

Colditz has had its fair share of characters, both decent and unpleasant. For some reason Jack Collins seems particularly unlikeable, to the point where he is my least favourite character across the entire series to date. He is a card player that cheats and takes advantage, he is wilfully against cooperating with others, and is disrespectful and insulting towards his fellow British officers. It is rather strange: I would actually argue that he is so completely unpleasant as a character that he effectively destroys his own episode.

Watching Collins wheel in and ruin a German guard feels part and parcel of the 'us versus them' set-up of the series, although by episode's end even that feels blunt and unpleasant: Collins is transferred to another prison, and the hapless blackmailed guard is court-martialled and shot.

Much more troubling is the manner in which Collins draws in and defrauds Brent of everything he owns. It feels mean-spirited. It beggars believe that no one would intervene, since he is doing is so obviously. In order for the storyline to work Brent has to behave in an entirely different manner to his previous 20-odd appearances. In the end it is simple a badly written episode.

None of that is guest star Ray Barrett's fault. He picks up the character as written and infuses him with life. Collins may be utterly repellent in almost every respect, but Barrett goes all-out to make him realistic and fully developed. It is a very strong performance in pretty much every respect; it is simply a shame that all the effort is wasted on a character that I simply did not want to watch.

The episode's climax gets genuinely unsettling, as prisoner discontent in the courtyard escalates to the point of gunfire on the German's part. The series has never been this close to an all-out massacre before, and for a solid 30 seconds the episode has you questioning who among the cast might be about to die. Sadly this 30 seconds does not make up for the awkward discomfort of the preceding 40-odd minutes.

Wrong-headed and vaguely unpleasant, "The Gambler" does not show off Colditz anywhere close to its best - and given the quality of most other episodes, that is a deep shame.
Posted by Grant at 4:47 PM