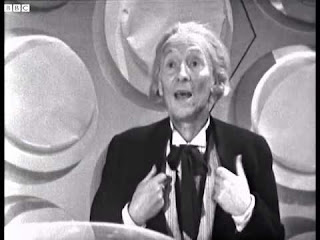 It is 26 December 1964, and time for the final episode of "The Dalek Invasion of Earth".

While the Daleks work to detonate their bomb inside the Earth's core, the Doctor (William Hartnell), Ian (William Russell), Barbara (Jacqueline Hill) and Susan (Carole Ann Ford) finally reunite in Bedfordshire to stop the Dalek invasion once and for all.

"The Dalek Invasion of Earth" ends with a finale that, while never particularly surprising, manages to bring this epic storyline to a strong and hugely entertaining close. It has been a success on a number of levels. Firstly this has easily been the most ambitious production of the series thus far, and with a few mishaps (the unfortunate-looking Slyther for one) the production team has pulled it off with tremendous skill. Secondly it has taken the Daleks and elevated them from one-off monsters to the series' first recurring villains. They will appear a third time to plague the Doctor before the second series is out.

The main conflict is resolved comparatively quickly, and that leaves time at the end for the episode's - indeed the whole serial's - most significant part: Susan's departure from the TARDIS. Five decades later audiences are well used to the Doctor's companions leaving the series, generally after one or two seasons. Back in 1964 it was unprecedented. Carole Ann Ford had grown increasingly frustrated with a lack of character development, and elected to resign from the role. To be honest she had a fair point: it is ironically only in this, her final serial, that she finally gets to blossom into adulthood and become a more forthright and confident character.

Susan's departure is beautifully handled. Over the course of the entire serial we have seen her fall in love with freedom fighter David Campbell (Peter Fraser), and he with her. He asks her to marry him; she demurs. She refuses to leave her grandfather. The Doctor, knowing that she will never voluntarily leave him, locks her out of the TARDIS and says his goodbyes. It is beautifully written, with visible pain for both Susan and the Doctor. William Hartnell in particular delivers an immensely heartfelt performance here. Looking forward, this sets Doctor Who one step closer towards the series people continue to enjoy today: the time-travelling alien with human companions that come and go over time.

This is a strong, emotional conclusion to a great serial. It continues Series 2's unbroken winning streak, with nine episodes watched and all nine being very enjoyable. Next up: "The Rescue".
Posted by Grant at 9:35 AM