Doctor Who: "All Roads Lead to Rome" 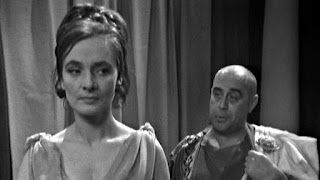 The Doctor (William Hartnell) and Vicki (Maureen O'Brien) come face to face with the Roman Emperor Nero (Derek Francis). Barbara (Jacqueline Hill) is sold as a slave into Nero's household. Ian (William Russell) is bound to a slave galley on the open ocean. Will the four travellers ever reunite with one another?

"All Roads Lead to Rome" is a superb balancing act, managing to not only juggle three separate storylines with equal attention and entertainment value but to also juggle three distinctive tones. Barbara's experience getting sold through a slave market is straight-up drama, Ian's galley adventures are the stuff of a classic adventure story, while the Doctor and Vicki's Roman encounters play out like comedy. That it all weaves together as smoothly as it does it really quite admirable.

Ian's adventures really do stand out from the rest of the serial's more comedic tones. It is genuinely impressive how much of the flavour of a sword-and-sandal epic that director Christopher Barry manages to develop on such a modest production budget. William Russell was already well experienced in this kind of adventure story as well; prior to Doctor Who he starred in the popular TV series The Adventures of Sir Lancelot.

Barbara, meanwhile, gets sold at auction into the household of the Roman emperor Nero. It is a stark drama by comparison to Ian's adventure, with Barbara refusing to hide her disgust at how she is treated, and defiantly warning the man who bought her for Nero that she will run at the first opportunity. It is a great showcase for Jacqueline Hill, who once again gives Barbara such an outstanding amount of resolve and dignity.

That leaves the Doctor and Vicki to continue their comedic masquerade of the Doctor as a renowned musician. Given the musician was already targeted for murder (and indeed successfully killed), that means fending off assassins at the same time as ingratiating themselves into Nero's court. Derek Francis plays Nero completely for laughs, very much in the vein of the Carry On films - of which he appeared in several. It is an odd shift for Doctor Who to play something so broadly comedic. It never really goes so far in this direction again.

This is a richly and rather enjoyable episode, maintaining Series 2's winning streak and keeping the quality ratio at 100 per cent.
Posted by Grant at 8:59 AM