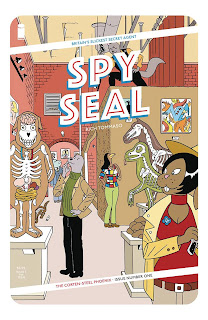 I am just going to guess that writer/artist Rich Tommaso likes European comics, particularly ones involving anthropomorphic animals like those of Lewis Trondheim. Spy Seal is pretty much exactly what it purports to be: a comic book about the exploits of a spy - who also happens to be a seal.

It is all there: the high panel count, the thin-line art style, the pastel colouring. It almost nails the entire aesthetic, yet feels just a little bit separate at the same time. The art is not quite as well developed, and some of the dialogue feels a trifle too long and stiff. As an opening attempt, however, it is amusing enough and certainly has plenty of character and personality.

In the end it's the charm that wins you over. It is a relatively predictable story, but it's also a comic book about a polo-neck wearing seal being invited to join MI:6 in fighting Russians - all told with anthropomorphic animals. That's rather cool. (3/5)

A mother fights to keep her two daughters safe when one transforms into a variety of extinct animals, and the other gets an entire pantheon of gods hidden inside her smartphone. On their way to the World Tree they find themselves tracked by the hunter god Tohil. This is a wonderfully strange set-up with appealing characters, a solid plot, and some absolutely wonderful artwork by Daniel Irizarri. This is only a three-issue miniseries, and that seems to be giving it a really strong pace that I like a great deal. (4/5)

Green Arrow's on a city-to-city quest to take down the Ninth Circle, and each step has taken him into contact with another prominent DC Comics character. After team-ups with the Flash, Wonder Woman and Lex Luthor, Ollie now works with Batman in the sewers beneath Gotham City. It's an entertaining little segue, tying in Gotham's Court of Owls to the Ninth Circle, and providing another little insight into Ollie's character and his angst over his family history. Next up: Green Lantern, which - given previous team-ups - should be the best encounter yet. (4/5)

Actual dick jokes, character comedy, silly riffs on Dungeons & Dragons adventures, and in the middle of it all a sudden and hugely effective chain of flashbacks to happier times in the lives of the series cast. It is an uneven mixture, but one that in this case works tremendously well. Since its revival in this second volume, Rat Queens has felt a little bit off-kilter and unsure of itself. With this issue it feels like it is back on track and telling the kind of scabby comedy, action and unexpected drama at which its original edition always excelled. Owen Gieni's artwork feels very comfortable now, which helps. (4/5)

The latest issue of Silver Surfer is a sudden and bleak dive into an unexpectedly final situation, with Norrin and Dawn trapped at the end of another universe without any real way to get out. It doesn't quite end here - although Slott and Allred do a pretty stunning job of making it seem that it will - but it does feel as if this iteration of Silver Surfer is wrapping up. I'll be sad when it does. This issue features a special treat for long-term readers, one that made me smile and really is a clever touch. (4/5)

A spate of child abductions leads Superman into a confrontation with the Parallax creature - the universe's personification of the emotion of fear. I always like when DC run a story like this: taking Superman and throwing him into Green Lantern territory, for example. It simply feels cool on multiple levels. That said, it is not the most dynamic or original of scripts. Doug Mahnke does a typically great job of illustrating it, though. (3/5)
Posted by Grant at 9:04 AM