Atom: The Beginning: "Birth of the Mighty Atom" 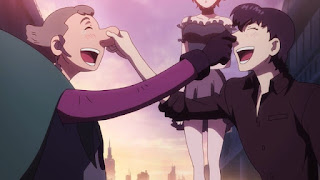 College students Hiroshi Ochanomizo and Ummataro Temma work together in the attempt to create a fully self-aware robot. Their latest attempt gets an unexpected road test when a fire breaks out at a street parade.

To me, and I suspect to more than a few others, Osamu Tezuka's Astroboy is one of the cornerstones of Japanese animation. It was hugely influential, internationally popular and has been periodically revisited over the decades with various remakes. Its historical significance puts an extraordinary amount of pressure on any new iteration of the story, since there is a weight of history and reputation with which original anime productions do not have to cope. Sadly, from this first episode at least, Atom: The Beginning buckles under the pressure.

It's biggest flaw, and it's almost a total dealbreaker, is that the animation quality is extraordinary low. The character designs are inconsistent from shot to shot. Scenes are regularly disrupted by sudden angular shots that completely fail to catch the likenesses of the characters. The scale is sometimes inconsistent. Sometimes a series might escape with some substandard animation by virtue of a strong story or great voice acting, but in this case the art quality is so egregious that not even Miyazaki-quality character work would likely supplant it in the audience's mind. True, I only watch a tiny minority of the anime produced each year, but this episode was hand-on-heart the worst animation I have seen in several years.

That is really a terrible shame, because while I usually dislike prequels there is something really appealing about a university-set comedy about Ochanomizo (aka Dr Elefun) and Tenma living together and trying to build robots. In middle age one will become the head of the Ministry of Science and the other will create Atom (aka Astroboy), and seeing them as enthused young men should have a lot of appeal.

It's early days of course, but an anime that doesn't burst out of the gate is an anime that is going to struggle while its competitors streak ahead. On top of that, the pedigree of the material really demands the best series possible. Based on what was presented here, it does not look like we're likely to get that.
Posted by Grant at 5:00 PM