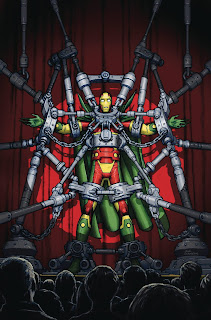 Mister Miracle of the New Gods returns to the DC Universe in a new 12-issue maxiseries. That is always cause for celebration, since Scott Free and his wife Big Barda have always been two great and underrated characters for DC. Every few years they pop up, delight me with their adventures, and then drop back into second-string obscurity again.

What makes this particular relaunch so exciting is the creative team: writer Tom King and artist Mitch Gerads, whose DC Vertigo book The Sheriff of Babylon was my favourite comic series of 2016. Seeing them reunited is a promise of great things to come.

Based on this first issue they seem pretty likely to satisfy their readers. This is an inventive and slightly off-kilter premiere, using a deliberately limited colour palette, deliberately mis-aligned artwork and many visual artefacts to create a genuine sense that the world has gone wrong. The same thing appears to be going on in King's script, in which Scott appears to be slowly going unhinged - or the universe around him is. Actually, I suspect the latter. It's a brilliant hook, beautifully packaged, and pretty much the number one must-read superhero book this month. (5/5)

Under the cut: reviews of Detective Comics, Doctor Aphra, Freeway Fighter, Rogue One: Cassian and K-2SO Special, and Sacred Creatures.

Azrael, Batman, Zatanna, Batwoman and Batwing versus an Order of St Dumas artificial intelligence, with surprising entertainment value, a satisfying conclusion and a plot development to shake Bruce Wayne to his core. This latest story arc has improved as its gone. While I am not a particular fan of Azrael, Tynion writes him well and knows how to openly exploit and name-check his history without ever making it seem like mockery or stupidity. (4/5)

Aphra's attempt to sell a lost Jedi crystal with an ancient AI inside has gone particularly badly, with the AI hijacking the robot body of one of the bidders, her robot sidekicks using a logical loophole to betray her, and a long-expected cliffhanger ending that does not spell good for anything that happens next issue. I really do adore Aphra's untrustworthy little murder-bots. They regularly make this the best of Marvel's Star Wars titles. A special note is also worth making regarding Kev Walker's very dynamic, action-oriented panel layout and angle choices. (4/5)

En route to the safety of New Hope, Rosa investigates the wrong derelict vehicle and gets bitten by a snake for her troubles. With her health failing fast, it is down to a last-minute race against the raiders to get to New Hope in time. The story for this entire four-issue miniseries has been pretty slight, but Simon Coleby's old-fashioned artwork has been fantastic to read: dramatic angles, tense car chases - never an easy thing to express on a static page - and a well-developed and affectionate tribute to Ian Livingstone's original Fighting Fantasy gamebook. I like the idea, and the execution has been a lot of fun. Fingers crossed another gamebook gets adapted soon. Deathtrap Dungeon, anyone? (3/5)

Rogue One: Cassian and K-2SO Special #1

Some tie-in comics are great little expansions of their source material, allowing readers to see beloved characters in different lights or change circumstances. They can expand the fictional universe a little, and be very rewarding for fans. Other tie-ins are just slightly crass cash-ins: the license holders know some fans will rush to buy it, and there really is not great need to put in a huge amount of effort or to provide top-notch work. Sadly this Rogue One prequel one-shot is the latter kind of book. The first meeting of Cassian and K-2SO did not need to be revealed, and adds nothing to their relationship. Fernando Blanco's artwork is not particularly interesting. It's an expensive book, comparatively speaking, and I really got not sense that I was getting value for money. This book is both redundant and unnecessary, and more than a little bill dull. (2/5)

Josh is on the run from giant demon cats with a man dressed like a priest who isn't making a lot of sense. He soon learns that he has been ensnared in a murderous plot by the literal Seven Sins to free themselves from their earthly bonds. Sacred Creatures is a beautifully illustrated comic book, and both of the first two issues have come packed with a lot of content. At the same time, the storyline feels unavoidably derivative: it's well told, but it's a well told copy of a lot of other stories. Individual elements may vary, but it still all feels a bit too overheated and familiar. (3/5)
Posted by Grant at 10:09 PM