Doctor Who: "The Powerful Enemy" 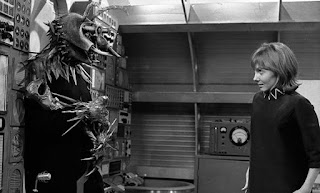 It is 2 January 1965, and time for another episode of Doctor Who.

While the Doctor (William Hartnell) mourns the loss of Susan, the TARDIS arrives on the planet Dido and Ian (William Russell) and Barbara (Jacqueline Hill) go exploring a mountain-side network of caves. In the valley below, the two survivors of a crashed human starship - Vicki (Maureen O'Brien) and Bennett (Ray Barrett) - live under the tyrannical control of the alien reptile Koquillion.

It is good that Susan's departure at the end of "The Dalek Invasion of Earth" was not ignored or quickly shuffled away. The early scenes of "The Powerful Enemy" see the Doctor visibly worn by the loss. He sleeps through a TARDIS landing for the first time. He seems very keen to send Ian and Barbara off to give him time alone. At one key moment he asks Susan to open the TARDIS door, then pauses, with a mixture of sadness and embarrassment. Barbara gently asks the Doctor to show her how to do it. It's a perfect small moment between the two characters: a little bit of healing for the Doctor, and the acknowledgement for Barbara that she and the old man really have become good friends.

On the planet Dido, a crashed spacecraft contained a badly injured officer named Bennett and a young woman named Vicki. Bennett is embittered and solitary. Vicki doggedly does her best to care for him, and to keep in contact with the rescue ship due shortly from Earth. At the same time Vicki is terrorised by the spiny alien Koquillion (another wonderfully shoddy-looking costume from Doctor Who's early years), who keeps both she and Bennett trapped within their ship and its immediate surrounds.

Vicki is, of course, the new Doctor Who companion; Susan's replacement. To a large extent it looks as if the production is swapping one mousy teenager for another, but in her debut episode at least Vicki is a much stronger and more confident character. She takes initiative. She shows bravery and determination. Maureen O'Brien gives an engaging and very likeable performance. While she will never replace the Doctor's granddaughter, she does seem ready to be a great addition to the TARDIS team.

With this episode Dennis Spooner takes over as script editor. He had previously written "The Reign of Terror" and will go on to write a few more serials alongside his editing duties. You do not really notice any shift in tone here, but that is almost certainly because the episode's writer, David Whitaker, was the first script editor.

This is solidly entertaining stuff, although the main storyline definitely takes a back seat to character work for a change. It leaves the 100 per cent quality ratio intact for another episode.
Posted by Grant at 9:01 AM