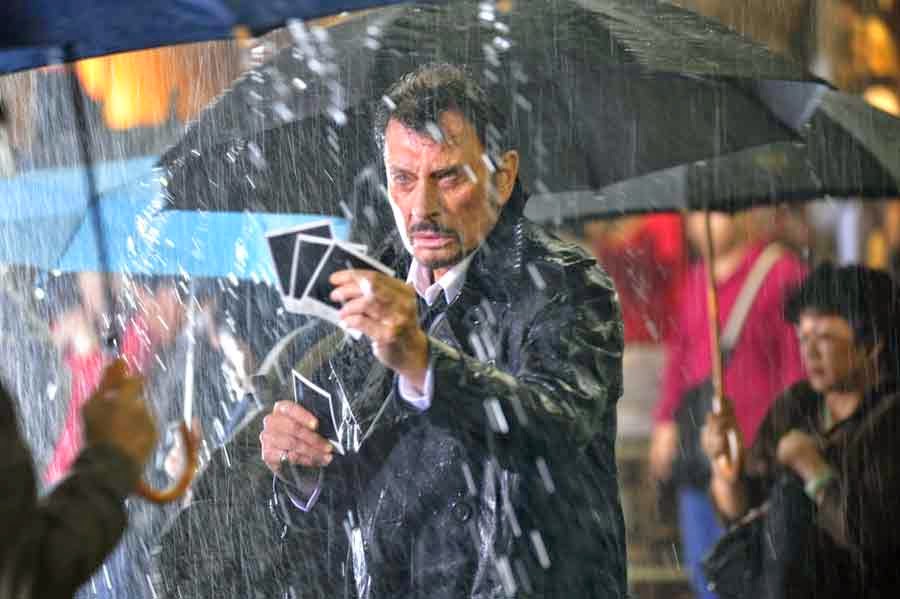 A pitched gun battle goes on in the woods near a barbeque area. The air is thick with smoke as two rival groups of men duck and weave between the trees, firing off their handguns whenever they think they’ve got a shot. Suddenly the moon is obscured by cloud, and the forest descends into a deep darkness. Everybody stops, their backs pressed up against the trees or the ground. Everybody watches the sky. Then, as the clouds slowly roll back from the moon, and the forest is illuminated once more, all seven men turn and begin shooting once again.

It’s an unusual and striking moment of calm, a typical poetic flourish from a director whose films are peppered with such imagery. Vengeance, Johnnie To’s first English-language feature, may not be one of his finest films, but it is rich with enough moments and character to still make it a potent movie experience.

A family in Macau has been brutally gunned down – a woman, her husband and both of her children. The woman’s father, an ageing French chef named Francis Costello (Johnny Hallyday), arrives in Macau to take his badly wounded daughter back to Paris and to seek revenge on the men who killed his son-in-law and grandchildren. By chance Costello stumbles upon three hitmen named Kwai (Anthony Wong), Chu (Lam Ka-Tung) and Fat Lok (Lam Suet), and hires them to help him hunt the killers down and exact his revenge.

Unsurprisingly there is more to Costello that meets the eye. Firstly he is himself a former mob heavy, highly skilled in firearm use and lacking any hesitation in gunning down his enemies. Secondly, a bullet wound to the head some years ago is slowly taking away Costello’s memories. His mission is one undertaken on borrowed time – he has no idea how long it will be before he forgets his enemies, his new companions or even his reason for seeking vengeance in the first place.

The incredibly photogenic French actor/singer Johnny Hallyday plays Costello with remarkable dignity. The part was written for Alain Delon, which is unsurprising: the name Costello, for example, is obviously drawn from French classic Le Samouraï. While there would be an obvious fascination in seeing Delon in the role, to be honest it’s hard to feel like we’ve missed out – Hallyday is fantastic in the role, and is the absolute highlight of the film.

Anthony Wong, Lam Suet and Lam Ka-tung play a group of triad enforcers in much the same way that they played them in Exiled, and before that in The Mission. Despite the overwhelming appeal of all three actors – I could happily watch them in any role – there is an undeniable feeling that To has taken one trip too many to the well. Likewise Simon Yam’s flamboyant performance as gangster George Fung seems too reminiscent of too many other gangsters he’s played in the past – including several for Johnnie To.

Lam Suet’s performance seems badly hampered by the film’s English dialogue – he is visibly reciting his dialogue phonetically, and it weakens what little dialogue he has. To be honest the fact that the film is performed mostly in English in a rather bizarre oddity. It was apparently insisted upon by the film’s French co-producers, presumably to help with an American release, but it weakens the film as a whole.

The French producers also insisted that To work from a completed screenplay, something that he generally avoids doing. I think the freeform, improvisational nature of the dialogue and character in To’s other films is a key part of what makes his work so creatively interesting. Here everything feels a little bit predictable. Regular moments of inspiration or creativity remain, but not to the extent seen in Exiled, Election or Throw Down.

That said, the film certainly looks outstanding. The camera work, by Cheng Siu-Keung, takes full advantage of the larger-than-usual budget to create what is possibly the prettiest Johnnie To movie ever. The sound design is also particularly strong – notably in an action sequence during the climax where the musical score cuts out and all we’re given to hear is the tinkle of bullet casings hiding the pavement.

The cooking and eating of food once again plays a strong role in establishing the characters and allowing them to bond. It’s obvious from his films that To is a lover of cooking – it crops up regularly in his films.

Ultimately Vengeance can be seen perhaps as the concluding instalment of a loose trilogy of films, following on from The Mission and Exiled and containing much the same content, style, tone and cast. It never reaches the dizzying heights of Exiled, but then again few films do. What remains is an entertaining thriller, and certainly a very decent gateway for new viewers into Johnnie To’s particular style of filmmaking.

This is one of several Johnnie To films I've reviewed on this blog, since he's one of my favourite directors: other reviews include Don't Go Breaking My Heart, Exiled, PTU: Police Tactical Unit and Throw Down.
Posted by Grant at 8:36 AM