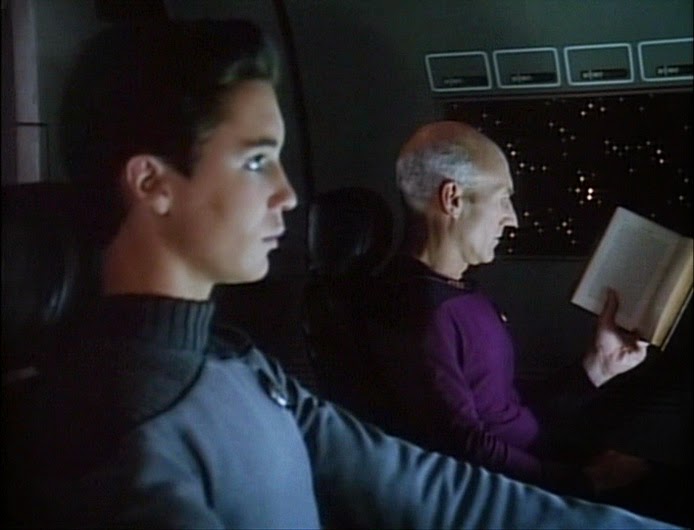 Picard needs heart surgery, so rather than letting Dr Pulaski do it onboard - where his crew might discover he needs a valve replacement - he voluntarily spends a day in a shuttlecraft with Wesley Crusher en route to a nearby starbase. Meanwhile Lt La Forge is kidnapped by intellectually challenged aliens who want him to become their permanent ship's engineer.

This is genuinely the plot of "Samaritan Snare", an episode of Star Trek: The Next Generation that simplies defies rational belief. It's unbelievable that somebody pitched this storyline, and it's unbelievable that the production team and producers accepted that pitch. And nowhere throughout the process did someone in a position of authority raise their hand and inform the room that it's a stupid idea for a story, and would make for a pretty awful hour of television. This is an episode that's bad, but not as bad as the worst episodes I've rewatched so far, but also wholly inexplicable, since we just saw with "Q Who" how good the series could be when everyone actually puts in some thought and effort.

The revelation that Picard has an artificial heart is an interesting one, and in the future (Season 6's "Tapestry") it will inspire a genuinely good episode, but here it's used as the most ridiculous of plot elements. The series has established very firmly that Picard is a smart, professional and direct man. The idea that he would be so vain over how his crew perceived him as to risk his own life travelling off to get major surgery somewhere else beggars belief. Of course things go wrong during his surgery, requiring the assistance of the most talented cardio-thoracic surgeon in the quadrant: Dr Pulaski. Basically this episode is a weak excuse to get Picard and Wesley in a room for a conversation (an idea that also develops into a good episode down the like - see "Final Mission"), and makes Picard out to be a self-centred, unlikeable fool in order to do it.

Meanwhile the Enterprise encounters a ship of Pakleds, mentally challenged aliens who need help in repairing their warp drive. Once La Forge beams over to fix it for them, they hold him hostage. This storyline doesn't fail because it twists the characters out of alignment, it fails because it simply snaps any suspension of disbelief. The Pakleds are too limited in their intelligence to fix their starship - so how do they manage interplanetary travel? They are smart enough to lay a trap, but not smart enough to see through Commander Riker's simple ruse to get La Forge back? They're simply too smart for one half of the plot, and too stupid for the other. As a result the whole episode falls apart.

Another bad episode - in this case a relentlessly stupid one - drives the quality ratio back down below 50%. Eight good episodes out of 17 gives us a season average of 47%. It should be noted that there are only five episodes left in Season 2. This means at best the season is going to score 59%, and I know for a fact that not every episode coming up is a winner.
Posted by Grant at 5:18 PM