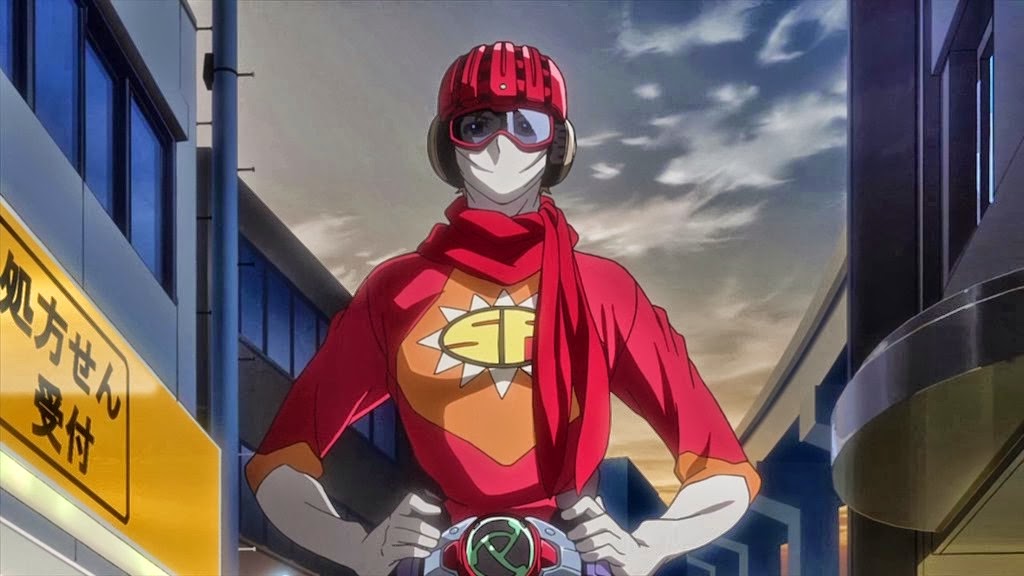 Masayoshi Hazama is a bright-faced optimistic, and ridiculously naive male model. He's also a lifelong fan of "tokusatsu" TV shows: those visual-effects heavy Japanese action shows like Ultraman, Super Sentai and Kamen Rider. He's such a big fan, in fact, that he's decided - despite having no supernatural powers, technology or even combat abilities whatsoever - to become a superhero. His first attempt ends with him beaten up and naked in an alleyway, which brings him to the attention of bored, cynical police officer Hidenori Goto.

Samurai Flamenco is a 2013 comedic anime, originally broadcast on Fuji TV. I've only watched the first episode, but it's a pretty likeable sort of comedy so I may go back and watch some more. It has been licensed in Australia by Madman Entertainment and has been streaming on Crunchyroll. It's basically Kickass or Super, only done with a much lighter touch and in an understandably much more Japanese style.
One of the reasons I think the episode worked for me is its characters. The episode is almost entirely based on conversations between its two leads, and they're very different people. Goto is a cynical, weary policeman who doesn't really do much in his day job besides staff his local police bureau and give directions to civilians. He's the perfect foil for Hazama, who is basically an idiot who should be placed under constant adult supervision. There's a lot here that's been seen before, but it's been seen before because it's a formula that works.

The animation has that nice crisp look to it that a lot of anime is developing at the moment: the benefit of digital production and colouring, I suspect. The episode is at its best when Hazama is explaining his love for tokusatsu, and showing off his exceptionally silly collection of merchandise and memorabilia.

I liked this enough to give it a second episode. It's got a lot of potential, and its combination of down-to-earth life and comedy makes for a nice contrast to the other anime I've been watching lately.
Posted by Grant at 5:22 PM