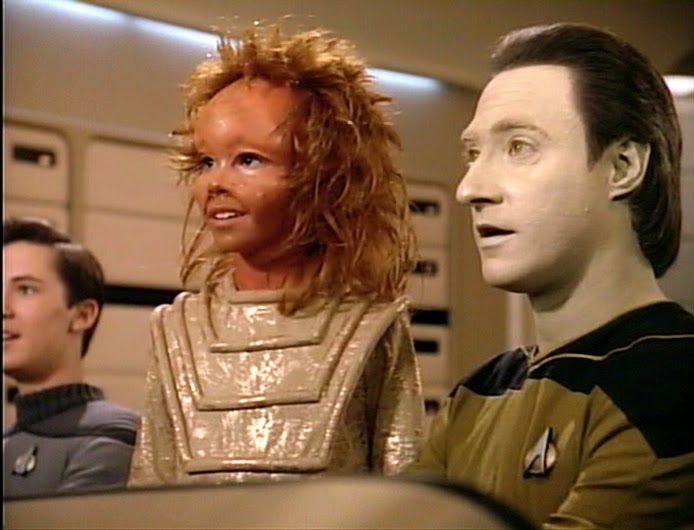 Wesley Crusher is placed in charge of a science survey team, testing his ability to lead others. Data makes contact with an alien girl from a pre-warp civilization, communicating with her from his quarters in violation of the Prime Directive.

They do love their Prime Directive on The Next Generation. It seems to get name-checked every second episode. Here Data knowingly violates that rule to meet Sarjenka, a young girl on a planet that's about to be destroyed in a system-wide natural disaster. When her imminent death becomes clear, a conflict arises over whether she and her people should be saved or if they should be left to their own devices. This really is a storyline that only works with Data in it: he has sufficient naivety and wide-eyed optimism to start talking to Sarjenka in the first place.

Of course the debate over whether or not to save Sarjenka's people is a bit of a red herring, since the Enterprise is safely able to stabilise her planet's core from orbit without her people even knowing the ship is there. It ultimately feels a bit false and hollow: nothing was really at stake, so nothing is really gained. Where it does succeed is in Data's childlike friendship with Sarjenka. Brent Spiner makes it completely believable, and the episode's climax - in which he shatters the Prime Directive by beaming her up to the Enterprise - is rather sweet. Chief O'Brien (Colm Meaney) makes a huge impact in his few scenes; it's already clear why he made enough of an impact to be put into Deep Space Nine as a regular a few seasons later.

The secondary plot sees Wesley take control of a science survey, and it is pulled off in a much better fashion than I was expecting. Wesley struggles to assert authority, but when he does his officers nod and do what they're told. It turns out that - for once - they're actual professional people with jobs to do, and once they're given a direct command they obey it. For some reason I was expecting something more melodramatic than this, and I'm happy not to get it.

This episode introduces Picard's love for horseriding, something he shares with writer Melinda M. Snodgrass. The holodeck scenes with the horse represent the only location shoot for the whole of Season 2. Every other scene in all 22 episodes was recorded in the studio. It's also the first episode to feature Picard drinking tea: he ordered one back in "Contagion" but got a potted plant instead.

All up, I liked this episode - although surprisingly it was the Wesley plot that entertained me more. That makes seven good episodes out of 15, or a quality ratio of 47%.
Posted by Grant at 10:13 AM