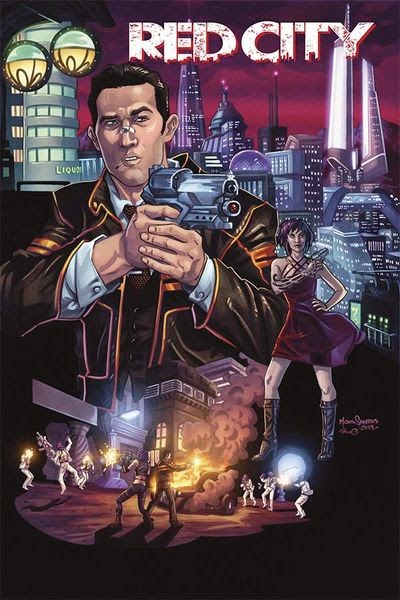 Image have now firmly established themselves as the go-to publisher for original science fiction comic books, so it's no longer a surprise when a new title comes out and it's some riff on SF. The latest entry into their growing range is Red City, a hard-boiled pulp thriller set on Mars several centuries in the future.

In the aftermath of a solar system-wide civil war, former police officer turned government agent Cal Talmage is tasked with recovering an ambassador's missing daughter in Mars Central - the Red City. The city is filled with humans and aliens; most of the aliens are pretty much anthropomorphic animals or have odd skin colours, pointy ears, and so on. The result is a sci-fi crime comic that actually reminded me the most of Gerry Anderson's abortive 1990s TV series Space Precinct - and that's not really a comparison any comic should want to make.

There is talented here: decent enough artwork and snappy dialogue, but this first issue is buried so deep in archetype and cliche that it's difficult to fully enjoy it. I was looking hard for some fresh ideas and to be honest couldn't really find any. It's entertaining to an extent, but if you're being published in the same range as Saga, Manhattan Projects, Prophet and Storm Dogs then I'm not sure that "to an extent" is good enough. (2/5)

Under the cut: reviews of Batgirl, Batman Eternal, Detective Comics, The Empty Man, FBP, Infinity Man and the Forever People, Lumberjanes, She-Hulk, Star Wars, That's Because You're a Robot and Worlds Finest.

A new story arc opens up, and it feels like a pretty climactic one. Batgirl resolves to take down Knightfall once and for all, after Knightfall once again targets Barbara's almost-a-boyfriend Ricky. To help in the takedown she recruits... actually that would spoil one of the most pleasant surprises of my comic-reading year. Suffice to say that long-term readers of Gail Simone's DC work have reason to be very, very happy. This issue also has probably the best art Fernando Pasarin and Jonathan Glapion have done thus far for the title: emotive, detailed and very slick. All up, this was a really enjoyable issue. (4/5)

The Catwoman is in the hands of Carmine Falcone, but Batman's on his way - as is Professor Pyg. I had a pretty strong suspicion when Grant Morrison introduced Pyg all the way back in Batman and Robin #1 that he was going to stick around and become a solid second-string villain for the Batman comics, and Batman Eternal seems to be bearing this out. This is a solid and enjoyable issue that does seem to be tying some of the book together at last: I was getting worried it was just going to expand and expand until there were too many plot threads demanding my attention. Guillem March's artwork is okay, but I have to admit I'm not a fan. (3/5)

Just who is going to be the next Robin? I figured at first it was going to be Batman's Harper Row, but then Snyder's flash-forward issue put paid to that by making her the new sidekick Bluebird. I figured that Damian Wayne was going to get resurrected. Now Buccelatto and Manapul have introduced Annette Aguila, who's an angry and vengeful acrobat with an alliterative name who's mother just got killed by criminals. What's a fan to do? Can't they just all become Robin? You could publish an awesome team book full of kickass 14-16 year-old crime fighters, all of whom are code-named Robin. Tim Drake could lead them. Seriously DC, drop me a line, I'll write this one for you for free. In other news, this issue features Batman versus a giant squid. (4/5)

In The Empty Man, yet another new miniseries from Boom Studios, the FBI and the CDC must team up to solve the mystery of a new pandemic. Called "the empty man", it is a virus with no known signs, method of transmission or even consistency of symptoms. People, however, are dying - and the empty man might just be sentient. It's difficult to properly judge the book, since this is just an opening chapter, but it's certainly remarkably foreboding and creepy, and boasts wonderful painterly artwork by Vanessa R. Del Rey. I'm hooked, so I guess we'll see how things go. (4/5)

This issue does what I love to see comics do the most, which is to create scenes of action, drama or suspense using the setting of the comic in such a way that such scenes could only be presented inside that comic. Here it involves a hectic escape from gun-wielding thugs with the help of a cliff and a small wormhole. It's clever stuff, and beautifully illustrated by Robbi Rodriguez. This book is selling really badly, so unless its trade paperback sales are strong it's unlikely to last much longer - why not pick up the inexpensive first volume and help them along? (4/5)

Infinity Man and the Forever People #1

Am I the only one who has a problem with the editor-in-chief of a major comic book publisher commissioning himself to write books? Once again Dan Didio lives out his own childhood, reviving another old DC title (Jack Kirby's The Forever People) and reuniting with Keith Giffen (OMAC) to do it. This is a reasonably entertaining book, but given the relative obscurity of the property 'reasonably entertaining' is not going to cut it in the long term. This book's got eight issues in it before cancellation, a wait of a few months, and then another relaunch by Didio some time in 2015. My money's on Kamandi next time. In the meantime, this is comparatively cheap and Giffen's art is appealing, so I'll probably give it a second issue to convince me - you might not be so generous, and that's perfectly appropriate. (2/5)

I quite liked the first issue of Lumberjanes, really liked the second and now I absolutely adore the third. This is a wonderful warm, funny and adventurous all-ages comic book with great, colourful artwork and really funny characters. In this issue the girls find themselves trapped in an underground maze of traps, puzzles and animated statues. I was particularly impressed how each character got their own chance to shine, and how well-written their conversations were. This is pretty much the best all-ages book of the year, and if you've got a child wanting to get into comic books this is one of the best ones they could possibly get. (5/5)

Jennifer goes looking for information on a lawsuit filed against her and some other heroes and villains - a lawsuit that she has no memory of whatsoever. What she and her legal team find is a secret that someone clearly wanted to be buried for good. I have no idea whatsoever of where this new plotline is going, but as far as set-up issues go this one is pretty much perfect. The first four issues of this book seemed deliberately silly and breezy, but things have taken a very dark and ominous tone here, and I love how smoothly Soule has made the transition. Guest artist Ron Wemberly helps out a lot: I'm not sure Javier Pulido's simple style would have worked as well here. Kevin Wada's cover is brilliant as always. (5/5)

I haven't been as engaged with this storyline as I have been with earlier ones, but Brian Wood does an excellent job of pulling it off. It's an action-packed, often quite tragic finale, that not only provides resolution for the past few issues but also the earlier Vader-centric two-parter as well. I have a few niggles, but they're mostly sad nerd continuity ones (like why the Empire would have been so susceptible to ion cannons at the Battle of Hoth if they're already been blind-sided by them here). All up, however, I'm happy. This is fun, exciting adventures with Han, Luke and Leia to tide me over until Episode VII next year. (3/5)

That's Because You're a Robot

This is a weird sort of rollicking, silly, deliberately retro one-shot, low on plot but high on jokes. It's the sort of book where someone would usually say "you're either love it or hate it", where to be honest I was actually kind of ambivalent about it. There's nothing here I haven't seen many times before, and I've seen it done funnier and much more tightly. This is a flabby, loose sort of comic that you'd easily forgive if self-published and photocopied down at the local Officeworks, but which isn't up to the necessary standard to get published via Image. If you're a fan of the creators you'll likely buy it anyway, but if not you can give this one a miss. (2/5)

I am growing rather disillusioned with this comic, which just seems to come and go each month without any real momentum, and without any sufficient direction to really justify its presence: it's been made pretty clear that Power Girl and Huntress are heading back to Earth 2 at some point, but for now the book just seems to be treading water. Guest artist Scott McDaniel gives the issue a bit of life, since he has such a jagged, active style, but all in all this is a really dull book. I like both characters, but they both deserve a lot better than what they're getting. (2/5)

This is the 825th post on The Angriest. Thank you for reading.
Posted by Grant at 12:20 PM