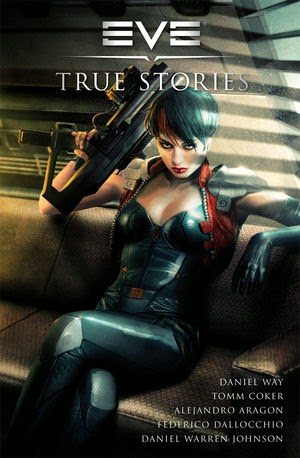 EVE Online is a peculiar MMORPG, in that it seems to generate its own internal dramas; rather than players work their way through publisher-dictated events and plots, the events seem to generate organically out of whatever the players themselves do within the game. A case in point is the now-legendary 2009 destruction of the "Band of Brothers" faction via in-game corporate espionage and high-stakes betrayal.

It's not often that something that happens in a videogame makes the news, but this one did: tech journals and geek-friendly websites were awash with reports of what happened. Now those events have been adapted into a four-issue comic, collected together by Dark Horse in a tidy little hardcover book. It has been written by Daniel Way with artwork by Alejandro Arajon, Tomm Coker, Federico Dallocchio and Daniel Warren Johnson.

What fascinates me about this book is not the collection itself, but rather the manner of its creation. This represents a long trail of creativity: the imagination of the people who developed and produced EVE Online in the first place, the players who created the drama within that game, and now the writer and artists who have adapted those players' game experience into a cohesive narrative fiction.

On the one hand it's marvellous to see a game where the players have such agency that their actions have resulted in this kind of well-crafted spin-offery. On the other hand it strikes me as a deeply cynical money-making exercise: the players paid money to play the game, and generate the plots, and now they're being asked to pay again - this time to see their own creativity replayed in comic book form. Way and the four artists have been paid, and certainly both Dark Horse and EVE developer CCP Games have profited, but the players have been stung twice over for using their own imaginations. If this is the future of popular entertainment, I'm not entirely certain that it's a bright one.

As for the book itself, it's well written and nicely illustrated, but does suffer somewhat from a lack of context. For regular players of EVE it's probably fine, but as someone who has never played the game I found some of the characters and background material a little difficult to follow. There's a lot of assumed knowledge in this book, which I suppose comes with the territory, but I'd have been more interested in seeing a longer book that spend a little more time fleshing out its characters and allowing the new readers to make sense of what was going on. As it stands it is a fine piece of media tie-in fiction, but with a little more effort it could have been a genuinely good science fiction comic in its own right.

I did enjoy EVE: True Stories, but I wanted to enjoy it more than I did, and I'm slightly concerned about the direction in which it is taking popular fiction. This feels like the thin end of a wedge: CCP have already licensed out the TV drama series, with plot lines taken from player interactions within the original game. The audience has become the writer, and paradoxically then are asked to become their own audience. How far down the rabbit hole can this go?
Posted by Grant at 9:03 AM