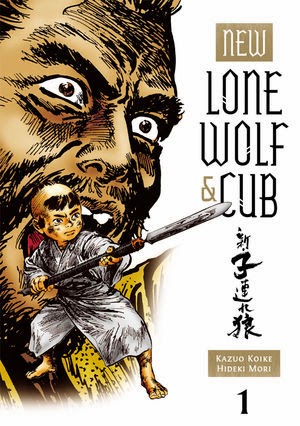 Lone Wolf and Cub is one of the most popular and influential manga of all time. It ran for seven years from 1970 to 1976, and told the story of disgraced samurai Ogami Itto who - after being betrayed and disgraced - travels Japan with his three year-old son Daigoro in lengthy and meticulously planned quest for revenge. It is an epic samurai drama that was collected into 28 volumes. The final sword fight alone runs for almost 180 pages. By the end Ogami lies dead, and it is his son who strikes the final blow against the antagonist Yagyu Retsudo. That's where the story ended, until writer Kazuo Koike returned in 2004 to write an unexpected follow-up. As the original artist Gozeki Kojima had died, this new series has been illustrated by Hideki Mori (Bokko).

I'm not sure why it's taken a decade for New Lone Wolf and Cub to be published in English. Certainly it took until 2000 for Dark Horse to properly release the original series, so I suppose we were pretty far behind to begin with. Late or not, I'm glad that Dark Horse are now publishing the new series, because it's incredibly good.

We pick up exactly where the final page of Lone Wolf and Cub left off. Daigoro stands watch over his father's corpse and refuses to leave. When he eventually collapses from exhaustion, he is picked up by a wandering ronin (a masterless samurai) named Togo Shigetada. Togo nurses Daigoro back to health, and begins to train him to became a master swordsman. Forces are already at work, however, to finish the job that Yagyu Retsudo started and kill Diagoro.

Daigoro has to be the most hardcore child in the history of graphic fiction. He has spent his entire short life in a constant state of bloodsoaked conflict. He shows endurance beyond what you'd expect from grown adults. He's killed, and he's managed to survive several attempts on his life. Shortly into this first volume he even tries to kill his new companion Togo, because anyone he can kill is unworthy to succeed his father.

It's always a risk to produce a sequel to a well-known and very well-regarded work, but I think Koike has actually pulled it off. This is a wonderfully entertaining manga that manages to retain the flavour of the original but, thanks to Hideki Mori's warmer, slightly looser artwork, feel like something fresh as well. There is more warmth to this book, mostly due to the less stoic Togo taking much of the spotlight. Dark Horse release the second volume in September, and I for one cannot wait.
Posted by Grant at 9:34 AM