Star Trek: The Next Generation: "The Icarus Factor" 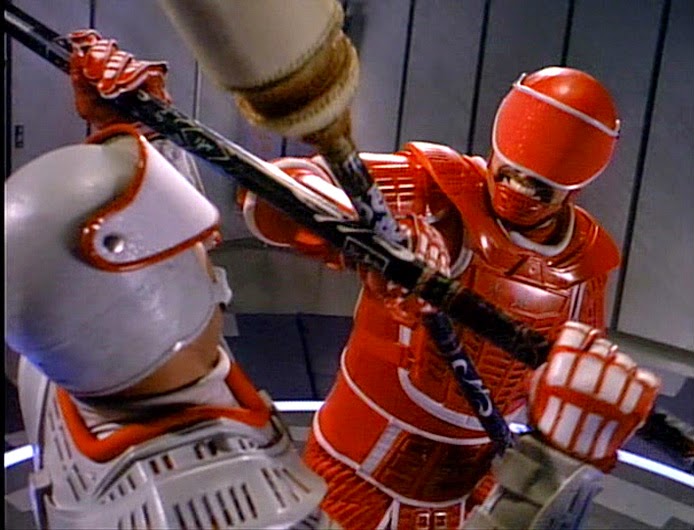 Commander Riker is offered his own command, and turns out to have fairly significant daddy issues. Worf is in a bad mood, so Wesley rounds up his friends to give him a proper Klingon celebration.

Oh my goodness, I don't quite know where to start. Let's start with the central narrative: Commander Riker is offered the captaincy of the USS Aries, which is about to embark on a multi-year deep space research mission. Starfleet has sent an attache to brief him on his new command: his own estranged father Kyle Riker. This, of course, re-opens all of the old wounds between the two, who are needlessly competitive and don't communicate very well.

This all winds up with them challenging each other to a duel of ambo-jitsu, apparently the ultimate human form of martial arts. Now I've never trained in a martial art myself, but despite this I'm pretty sure that the culmination of karate, kung fu, judo and tae kwon do is unlikely to be a sport where people dress up like hockey goalkeepers, blindfold themselves and then wildly swing at each other with padded sticks like a bad remake of It's a Knockout.

It's all so dreadfully embarrassing. You can see the loathing on Jonathan Frakes' face for the whole scene. I wanted to reach into the screen and give him a hug, and tell him everything was going to be all right, and that The Next Generation would get a lot better in the new year.

Kyle Riker (played in a very mid-1980s style by Mitchell Ryan, by which I mean 'stiff and unconvincing') also turns out to have shared a love affair with Dr Pulaski, which seemed an enormous coincidence. I suppose it does give her character something to do.

The subplot involving Worf's day of ascension is remarkably awkward, even by Next Generation standards. The cast do their best with the material, but it's still pretty shaky stuff. It's a shame - one of the things the series has handled so well thus far is developing Klingon culture. This episode feels like a misstep.

My biggest problem with the episode, however, and it's one that will come up a few more times as the series goes on, is Riker turning down his promotion. Earlier episodes had made it pretty clear he was a career officer and was keen for advancement. Now it's handed to him on a plate, and he turns it down. The actual reason is pretty clear - Paramount have Frakes on a five-year contract. The same, however, cannot be said for Riker and the Enterprise. It stretches credulity every time he's offered the captain's chair and turns it down. By the time he does take a promotion in Star Trek: Nemesis it's a wonder that Starfleet offered him the job at all.

So far there have only been six good episode out of 14 this season. I'm surprised - I really did remember the quality of Season 2 being a bit higher than this. The quality ratio is now 43%, which is only marginally better than Season 1.
Posted by Grant at 9:15 AM