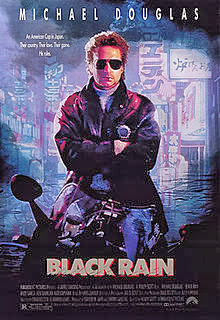 Two New York City police detectives (Michael Douglas and Andy Garcia) capture Sato (Yasaku Matsuda), a member of the Japanese yakuza, and must escort him back to Osaka. When Sato escapes at the airport they are thrown into an unfamiliar world of tradition and honour as they struggle to track him down again.

Oh yeah, Black Rain. It's a very 1980s movie, replete with rebel cop on the edge, shootouts and over-the-top murders, and a healthy disrespect for Japanese culture and tradition. It's actually quite an uncomfortable watch from time to time: the Japanese are portrayed as rules-obsessed, repressed and stuffy, and their by-the-book policing is explicitly portrayed as unhelpful and futile. There are about half a dozen conversations throughout the film about honour: who has it, who doesn't, who's lost it and who's taking it away from someone else. Every time Hans Zimmer's score kicks it a combination of twinky-twanky cod-Asian sounds persist in letting you know that this film is set in Japan.

So why watch it? Well, there are a bunch of reasons.

Douglas and Garcia are accompanied in their mission by Japanese assistant inspector Masahiro Matsumoto (Ken Takakura). A combination of genuinely good writing and a superb performance by Takakura makes him a genuinely enjoyable character to watch. He grows and develops over the course of the film, and crucially the script never allows him to follow lose his integrity or his Japanese identity.

Also great is Yasaku Matsuda as the villainous Sato. It's a flamboyant performance, and it brings with it a wonderfully showy quality. He's simply fun to watch. This was Matsuda's final performance - he was diagnosed with terminal bladder cancer before the film commenced shooting, and died shortly afterwards.

The other star, of course, in the film's brilliant atmospheric look. Ridley Scott has directed a number of good and not-so-good films, but the one guarantee you have with every one of his films is that it will look fantastic. It's fascinating how Osaka, shot by Scott using his trademark smoky rooms, back-lighting and beautiful shot composition, looks pretty much exactly like Los Angeles in his 1982 classic Blade Runner. That was science fiction; Osaka is just Japan.

This is a problematic movie, crippled by some fairly racist assumptions, but also buoyed by some good performances (it's hard to believe, but here Douglas plays a cop for the first time since The Streets of San Francisco). I enjoyed it. Sort of. Actually I'm not sure - how do we negotiate these kinds of films today? Do we take the race assumptions and put them to one side, or do we throw the baby out with the bathwater?
Posted by Grant at 7:44 PM