Game of Thrones: "The Ghost of Harrenhal" 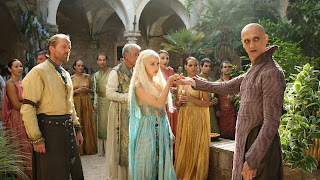 One of the things I do like about Game of Thrones is that they do keep things moving. Not necessarily quickly, but you're pretty much guaranteed a major progression of the narrative in each episode. Within minutes of this episode starting King Renly Baratheon is dead, murdered by Melisandre's terrifying shadow monster. Falsely assumed to be Renly's murderer, Brienne is forced to flee in the company of Catelyn Stark. I have fallen utterly in love with Brienne: she's an extremely strong, nuanced, awkward character, and Gwendoline Christie plays her extremely well. This Stormlands sequence neatly cuts out one of the claimants to the Iron Throne, with older brother Stannis assuming control of Renly's army.

Back at King's Landing, Tyrion uncovers one of his sister's secret plans to defend the city from Stannis' army: eight thousand pots of "wildfire" to be catapulted onto the Baratheon forces. These scenes between Tyrion (Peter Dinklage) and Bronn (Jerome Flynn) are the absolute highlights of the series this season: wry, funny, cutting and just all-round entertaining. This episode's scenes are no different. (There's also a cameo for George R. R. Martin's pal Roy Dotrice, who previously acted in Martin's ace 1980s TV drama Beauty and the Beast.)
Meanwhile Theon continues to suffer at the ridicule of his own people: he's put in charge of a single ship with which to conduct raids, with a crew who actively leave him onshore at the first meeting. I'm still feeling a little thrown by Theon's arc this season, because I honestly overlooked him last season. As a result I feel that I'm playing catch-up and not getting the most out of this storyline as I should be.

There are some scenes for Jon Snow and the Night's Watch, and Bran Stark at Winterfell, but neither are really here nor there: they push things forward. I kind of feel the same way about Daenerys' adventures across the Narrow Sea: while they're strong enough in isolation they continue to feel like I'm watching a different series whenever she comes on-screen. The chicanery and political manoeuvrings in Qarth continue - and I do want to highly Ian Hanmore's wonderfully creepy performance as the warlock Pyat Pree.

The episode's best sequences are those involving Arya Stark, now masquerading as a peasant cupbearer for Lord Tywin Lannister, grandfather of the king who executed her father. These scenes - and those with the mysterious assassin Jaqen, who offers to assassinate three people for her - are the strongest parts of the episode by a country mile. Maisie Williams is an exceptionally gifted young actor, and she gives Arya a suitable combination of fear, bravery and determination.

Overall this is a particularly entertaining episode: that makes four out of five, with this episode marking the halfway point of Season 2. It's not for everybody, but for those who do enjoy Game of Thrones' violent slow-burn narrative this is one of the best bets currently on television.
Posted by Grant at 8:51 AM