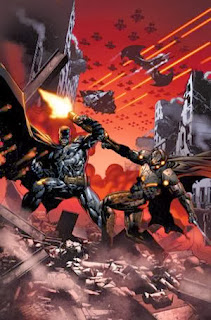 This week, with the Villains Month promotion thankfully behind them, DC Comics returned to service-as-usual with the 24th numbered issues of their regular titles.

Wait, did I write service-as-usual? Actually it wasn't. In a sneaky manoeuvre DC have quietly cut the back-up strips from their $3.99 titles (Action Comics, Detective Comics) and instead given them better quality covers on a thick glossy stock and 22 pages of story. In a diminishing marketplace I don't begrudge DC charging what they think the market will accept, and to be honest the bulk of the back-ups were never that interesting, but that extra dollar for what is essentially two pages of art and a nicer cover is a bit of an unpleasant hit.

I enjoy Detective Comics and All-Star Western, but do I enjoy them enough to pay $3.99 for a shorter issue? Books such as Sword of Sorcery and Threshold were hobbled from the start thanks to the higher price point. How much more badly would they fare with six pages less content?

Most important of all, how far down the line are the $4.99 monthly comic books?

Under the cut: reviews of All-New X-Men, Batwing, Bedlam, Daredevil: Dark Nights, Detective Comics, Doctor Who: Prisoners of Time, Forever Evil, Green Lantern, He-Man and the Masters of the Universe, Hinterkind, The Movement and Trillium.

This is the issue where things really slow down. We get a fair amount of backstory to the future of the X-Men, and a couple of conversations very similar to ones that we've already read, and then a cliffhanger much like the cliffhangers from which we've already hung. That's the problem with a Bendis storyline: sooner or later the decompression's going to kill you. All that said, there is something quite impressive about a storyline that can bring together the X-Men, the X-Men of the past, the X-Men of the future and the other X-Men of the other future. Many more issues of this and we're going to have to start drawing diagrams. (3/5)

Quite how this book continues to be published with sales this low is beyond me: at this stage I can only assume a certain level of belligerent stubbornness. To be fair this issue isn't actually too bad; certainly it's a big jump up from the stuff that we've been getting in recent months. I think the basic flaw in this book is its protagonist: a rich kid from Gotham fighting crime in Gotham is something we've already got several monthly comics about. By taking Batwing out of Africa Palmiotti and Gray have also taken away the one reason this comic had to exist. (2/5)

Comic books are a serial medium, and it's feeling like there's a long time between drinks for Bedlam. That weakens the whole book, because any anticipation I have on seeing how a cliffhanger resolves is eventually replaced by my straining to remember what actually happened in the previous issue. Issue #8 was published in July. Issue #9 has finally come out in October. This issue, once I remembered what was going on, is pretty good stuff. Ryan Browne isn't capturing the tone as well as Riley Rossmo did, but give him time - he seems to be improving every issue. (3/5)

David Lapham's two-part story comes to an end: while the Avengers are busy defending New York from a giant monster, Daredevil is chasing after a ten-inch high suicide bomber. This is a wonderfully nostalgic, old-fashion Marvel comic book: the kind where all the superheroes in the world live in New York City and bump into each other all the time. This nostalgia is emphasised by Lapham's agreeable simple artwork and script. It's all wonderful fun. (4/5)

Batman has a final showdown with the Wraith, a rogue billionaire with as much drive and as many resources as Bruce Wayne. This is a solid, very enjoyable conclusion to the Wraith story arc. Could it have been better? Yes. More original? Sure. Sometimes, however, there's a great amount of satisfaction to be had in reading a solid, unpretentious Batman comic - and that's certainly what you get here. Layman and Fabok have been doing great work on Detective Comics in the last year or so, and there are promising signs that they have their eye on a slow-building over-arching storyline. (4/5)

Doctor Who: Prisoners of Time #9

For the last eight issues this series has been building up to the reveal of the villain's identity, and it's been clear it was going to be a character that Doctor Who fans had seen before. For the last few issues I've been worried it was going to be former companion Adric somehow raised from the dead and turned evil, but instead it's (drum roll, pause for spoilers)... Adam. You remember Adam don't you? He was a companion for all of two episodes in 2005 before Eccleston dumped him out of the TARDIS for being a prat. I actually groaned when I read it. The late, great Doctor Who fan, critic and novelist Craig Hinton coined the term 'fanwank' specifically for this kind of continuity-indulgent twaddle, obsessed more with putting two and two together in the backstory of the franchise than in actually telling a functional story. That's Prisoners of Time in a nutshell - and there are three more issues to go. Despite some nice art by David Messina, this book stinks. (1/5)

The second part of Johns and Finch's seven-part miniseries doesn't pack the same punch as the first, but it's still a broadly entertaining book. The Justice League have vanished, apparently dead, and in their place are a series of evil doppelgangers. Humanity's only hope? Lex Luthor and Bizarro. I've seen worse pitches for a comic book, and Johns certainly knows how to write Luthor well. At this stage it's all down to how well the storyline concludes. (3/5)

Another month, another big Green Lantern crossover based around the spectrum of ring-wielding superhero teams across the galaxy. Remember when the Green Lanterns fought intergalactic crime and didn't spent all of their time fighting the Blue Lanterns, or the Black Lanterns, or the Yellow Lanterns? I was really hoping with the departure of Geoff Johns as writer we'd get some straight-forward science fiction adventure going on here, but instead DC are just repeating the same motions expecting the same results. It's getting pretty boring, and I'm not inclined to pick up copies of the other three GL books this month just to find out what happens. Good art by Tan and Hunter - but in service of what? (2/5)

He-Man and the Masters of the Universe #6

The first story arc concludes rather sharply and, in one or two ways, quite unexpectedly. It still has the same problems I've been seeing from the beginning, though: it's trapped somewhere between charting its own course as a sort of sci-fi/high fantasy blend and being a nostalgic exercise for kids who bought the action figures. I still think it needs to be one or the other. I enjoyed this issue, but it feels like it could be much better than it is. (3/5)

Another new Vertigo monthly kicks into action: here Ian Edgington writes a story about a post-apocalyptic Earth where forest has overrun the cities and humans have all but died out. In their place? Elves, giants, trolls and other creatures of myth and faerie. This is one of those comic books that I want to like more than I do, because nothing in comics used to entertain me more than a brilliantly written Vertigo book. I think the problem here is a lack of identity: it's a little bit like Fables, a little bit like DMZ, a little bit like The Massive, and a little bit like Y the Last Man, and not enough like... well, itself. Of course this is only issue #1. It's worth giving it a second chance next month. (2/5)

I feel like this book is losing its direction. It started off promisingly with reasonable artwork and a great central conceit - superheroes akin to the Occupy movement - but with each succeeding issue I've felt less invested in what is going on. It doesn't seem to have any drive to it, and with its sales plummeting it's going to need a lot of drive to succeed. The bottom line for me is that Simone and Williams are both immensely talented, and could both be doing a much more interesting book than this - so why aren't they? (2/5)

In terms of story, Jeff Lemiere's science fiction mystery continues to impress me. I'm hooked yet have no godly idea of what is actually going on - in a good way. The art continues to be very distinctive and expressive, and certainly very different to the sort of artwork you'd normally see in this kind of comic. My big beef, and it irritated me enough to not enjoy this issue as much as the first two, is the way in which the book constantly presents upside-down pages to represent events in the second time period. It gets very old very quick having to turn the comic upside-down and then right way-up, turn about, for the whole 20 pages. It's a schtick the book needs to drop. (4/5)