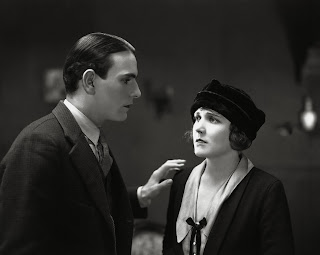 Mention Charlie Chaplin's name and the image immediately comes to mind of his internationally renowned tramp character. Of course Chaplin's career extended far beyond his early comedic short films, and one of the best examples of that broader work is A Woman of Paris (1923). It is a dramatic feature film, written and directed by Chaplin, in which his famous tramp does not appear. Nor does he, beyond a one-shot cameo. While it has comedic elements, the humour comes from the recognition of ordinary human behaviour rather than the broad slapstick one might expect. Audiences of the time hated it, and stayed well away. Viewed 90 years later it turns out to be a remarkably sophisticated and effective drama, and very much a groundbreaking film.

Regular Chaplin collaborator (and one-time girlfriend) Edna Purviance pays Marie St Clair, an unhappy young woman living in rural France. She arranges to elope to Paris with the artist Jean (Carl Miller), but unexpected circumstances result in them separating. A year later, she reunited with Jean - only by now she is the girlfriend of the rich, cynical bachelor Pierre Revel (Adolphe Menjou), and is forced to choose between true love and the comforts of Pierre's affection (and financial support).

This film was a tremendous risk for Chaplin. At the time he was pretty much the most popular actor in Hollywood, and had just used his considerable wealth to co-establish United Artist with Pickford, Griffith and Fairbanks. A Woman of Paris was his first film to be released via his new studio, and rather than rely on a tried-and-tested formula of irreverent slapstick comedy he instead writes and directs a mature drama in which he does not even appear. The first thing in the movie you see is a caption, signed by Chaplin, warning viewers that he will not appear. Initial screenings were also accompanied by paper flyers warning audiences that Chaplin did not act in the film. On top of that the film was broadly considered to be immoral, and several US states banned its release.

Purviance is excellent as Marie, and really fleshes out the character's dilemma: to be loved or to be comfortable. It's a question that plays as well now as it did 90 years ago. It's a deep shame that this film wasn't successful: Purviance never quite rose above her role as "Chaplin's love interest", and only appeared in one more feature before retiring. Even more impressive is Adolphe Menjou as the charming and surprisingly callous Pierre. A standout scene in the middle of the film has Marie becoming angrier and angrier in an argument, and Pierre laughing harder and harder. The scene's conclusion: him doubled over, her in a doorway with a broken shoe muttering (in a single caption) "Idiot." is simply a perfect moment of cinema. This scene, and others, is simply so well observed. I'm not educated enough in early cinema to point to where realism entered the medium, but if someone was to tell me it was A Woman of Paris I wouldn't be surprised.
Posted by Grant at 9:01 AM