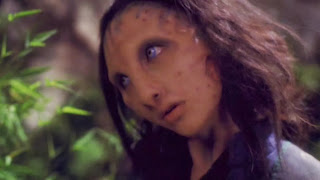 Pretty much my least favourite episode in the Star Trek franchise is the one where members of the crew evolve into alien creatures. There was "Identity Crisis", the Next Generation episode where Geordi was turned into a rave-party blue alien. There was "Genesis", where the entire Enterprise crew devolved into bug monsters and lizards. I think my least favourite was "Threshold", a Voyager episode in which Paris and Janeway mutate into space newts and have several space newt babies.

In "Extinction" an away mission to a jungle planet goes terribly wrong when the crew are infected by a mutagenic virus that transforms them into primitive ape-like creatures. While T'Pol attempts to convince them to return to Enterprise, they are hunted by another group of aliens desperate to eliminate the spread of the virus by any means necessary.
There's actually a pretty cool science fiction concept at the heart of "Extinction". Sadly it's hard to care about it, because the transformed crew members - Archer, Sato and Reed - are so damned irritating to watch. To be honest, part of the problem is that the actors genuinely look embarrassed to be there. They look ridiculous and they've been directed to move in silly ape-like ways. The episode's director, Next Generation actor LeVar Burton, reportedly informed executive producers Brannon Braga and Rick Berman that he was ashamed of directing it. Burton shouldn't feel ashamed - as a TV director he's stuck working with what he's given. He should feel angry, however, that his not-inconsiderable talents behind the camera were wasted on this. The cast should feel angry as well. If anyone should feel ashamed, it should be writer André Bormanis and producers Braga and Berman. There is absolutely no excuse for television this bad to make it to the screen.

As I mentioned earlier, the base concept of the episode is actually a good one: a species that's dying out creates a virus that transforms aliens into that species. It's a concept ripe for drama and interesting storylines - it's just a shame they picked the storyline that they did. There are a few bits and pieces worth watching: Trip and T'Pol get another scene to further their budding romance, and it's one that works much more smoothly than the ones in "The Xindi". It's just a shame that the scene had to be wedged into an episode that otherwise pretty unwatchable.

We're three episodes into Season 3: precisely one of those episodes has been good. That leaves it with a quality ratio of 33% - not promising.
Posted by Grant at 9:07 AM