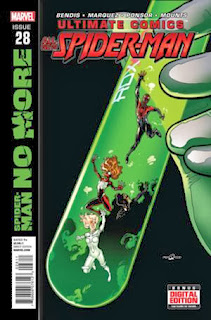 This week saw the final issue of Ultimate Comics Spider-Man hit the shelves. For almost 30 issues young Miles Morales has struggled with the mantle of the Spider-Man. It's been a brilliant comic, centred on a great character, but like all superhero comics the status quo has to change sooner or later.

I do question the necessity of Marvel's Ultimate imprint these days: when it was launched it was to give readers a new, fresh take on old characters that was unsaddled by decades of continuity. Of course that was 13 years ago, and while I've adored Ultimate Comics Spider-Man it is definitely now saddled with the same sort of continuity it was launched to avoid. The entire line now segues to a set of four miniseries based around Galactus eating the Ultimate Earth; after that I'm not sure what Marvel's plans are. My recommendation is to kill the line and replace it with something fresh.

As for Ultimate Comics Spider-Man #28? It's a great, action-packed climax filled with nice character moments and satisfying resolutions. Beautiful art and layouts, appealing superheroes and some of the best scripting Brian Michael Bendis has written in a while. It may be going out, but it's going out on a high. (5/5)

Jonah Hex's 21st century adventure continues, and I have to admit this storyline is finally gelling for me in a big way. While part of me bemoans how far the book has strayed from its original concept, another part of me is reveling in Hex meeting the various characters of the modern DCU: in this issue it's not only Bruce Wayne but John Constantine as well. The idea of Jonah Hex going to Burning Man, as well as sucking on a lollipop through the hole in his cheek, amuses me immensely. (4/5)

Some big revelations come up this issue about Aquaman and his origins. It's a pretty enormous change to the status quo, but of course being Aquaman - something of an acquired taste - it hasn't really gained the attention that a similar revelation would for other characters. We're running up towards the end of Johns' run on this title. I can't wait to see where Jeff Parker takes it next year. It's great to see this book sell as well as it is - now I want to see some new directions and arcs from it. (3/5)

Any enjoyment I gained from this issue was deflated somewhat by the final page revelation that this volume of Daredevil is about to end: there are only four issues left before we get a new Daredevil #1, with a new status quo and possibly even a new creative team. For the past three years or so this has been a stand-out superhero comic. Whatever Marvel do in 2014 is going to have a high bar to meet, quality-wise. (4/5)

The Reverse Flash storyline concludes here, and with it Manapul and Buccellato's two-year run on The Flash comes to an end as well. It's been an exceptional run for the character with some stunning artwork and layouts, and to a large degree it's a run that's travelled unfairly beneath the radar. Hopefully more readers will discover it in future months and years via the trade paperbacks. As a conclusion it's a satisfying one, and one that leaves the book wide open for the future - and new writers and artists to come. (4/5)

The Green Team head into space to investigate a mysterious asteroid that's set to collide with the Earth. I'm continuing to really dig the hell out of this book: it's funny, warm and broadly entertaining. This issue in particular is just a really fun and breezy superhero comic with solid writing and really engaging artwork. It's a shame that it failed to find an audience - DC has confirmed it's ending with its eighth issue in January. (4/5)

Before the devastating events that turned the world on its head, Callum Israel's Ninth Wave spent most of its time fighting whalers. Now Callum has arrived in Scandinavia to return to this work - only it seems unclear whether he's in the right any more. This is a great issue of The Massive, giving the book a strong new direction and launching a whole new storyline. It's often a very dry book that, while intriguing, regularly fails to properly engage me on an emotional level. Not so this issue: this is really strong, evocative stuff. (5/5)

While this comic continues to be well written and features strong artwork, I'm slowly finding myself less and less engaged by it. I think part of the problem is the characters: the first arc featured some great supporting characters, and for the last few issues they've been AWOL - leaving a pair of relatively bland protagonists to maintain my attention on their own. Hopefully they'll be back sooner rather than later, otherwise this book's going to get boring really quickly. (2/5)

Wolverine and the X-Men #37

The penultimate installment of the "Battle of the Atom" crossover sees four sets of X-Men plunge into all-out conflict, with past, present and future now at stake. It's an epic finale, and all that's left now is to see if the storyline wraps up in a satisfactory manner. Jason Aaron scripts this issue, and matches it seamlessly with previous parts written by Brian Wood and Brian Michael Bendis. Camuncoli and Currie's art satisfies as well. (4/5)

The big development this issue is for Loki, and it's a development that I (a) saw coming a long time ago, and (b) nonetheless disappoints me that a character who's been working better than ever in recent years is being discarded in favour of a version more in line with the movie version of the character. The issue itself is entertaining, but isn't matching the promise of this title's earlier issues. It's reportedly ending soon (why are all these books ending at the moment?), which I think is going to leave the completed Young Avengers as a curious and missed opportunity. (3/5)