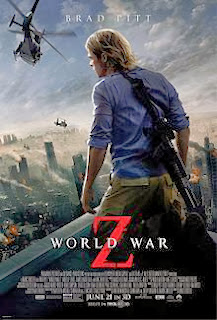 Gerry Lane (Brad Pitt), a former UN investigator now living in Philadelphia, is caught with his family in a worldwide zombie outbreak. As civilization collapses around him, Gerry reluctantly agrees to join a virologist on a mission into South Korea to find the source of the infection.

World War Z has been one of 2013's more contentious summer blockbusters. It first gained notoriety for the free way in which it adapted Max Brooks' popular novel, putting fans of the book offside. Then word spread that the entire climax of the film had been re-written and re-shot, driving the budget towards $200 million dollars and giving the entire production a familiar stink of death about it. Critics and pundits were predicting a commercial and critical disaster, and the general audience seemed pretty ambivalent.

It turns out that you can't always trust the entertainment press: World War Z may diverge considerably from its source material, but it remains an intelligent, tense and highly enjoyable zombie thriller. It has ultimately grossed more than half a billion dollars in cinemas, and while reviews have been mixed it has received a generally favourable reception. I really liked it: it's pretty much what it says it is on the tin: a big budget Hollywood epic that takes the zombie film from its low-budget, independent roots and pushes it for all the visual spectacle that it's worth.

This isn't a particularly graphic horror film, although it's certainly a wonderfully tense one. The zombies featured are very much of the speedy post-28 Days Later variety, which may annoy some purists. To be honest much of the film feels like a glossier, bigger scale remake of that film, particularly given the film's climax (the second, re-shot version) that abandons the mass carnage of earlier scenes to focus on a tense, stealthy journey through a Welsh medical facility. This shift in tone and setting is part of what made the film so enjoyable for me: it rattles along at a remarkable pace, taking in East Coast America, a South Korean military base and even the city of Jerusalem as Gerry races around the world on a hunt for a cure. The film is well shot and edited, with director Marc Forster re-using a lot of the same techniques he used to great effect in his James Bond film Quantum of Solace.

Brad Pitt is a solid, identifiable lead, and he's been surrounded by an excellent guest cast. I particularly liked Daniella Kertesz as Segen, an Israeli soldier who accompanies Gerry on part of his mission, as well as Mirielle Enos as Karen, Gerry's wife.

The late, great Howard Hawks always claimed that the secret to a decent movie was "three great scenes, no bad ones". Based on that criteria, World War Z certainly qualifies. It's a big Hollywood spectacle in the best sense, and in a year with more than its fair share of dubious blockbusters it's a welcome relief.
Posted by Grant at 9:05 AM