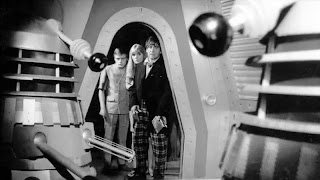 Who50 counts down to the 50th anniversary of Doctor Who by reviewing my favourite episodes and serials over the history of the programme, counting down from #50 to #1. Today, #1, my favourite Doctor Who adventure of all time: "The Power of the Daleks", a 1966 six-part serial written by David Whitaker and Dennis Spooner and directed by Christopher Barry.

On the human colony of Vulcan, an ancient spacecraft has been recovered. Inside the colony's lead scientist discovers three inactive Daleks. He wants to reactivate them and use them to improve the colony's manufacturing capacity. Only the Doctor may be able to stop the Daleks from taking over the colony - but the Doctor isn't quite himself. In fact, his travelling companions Ben and Polly aren't one hundred per cent certain that he's the Doctor at all...

"The Power of the Daleks" isn't just a brilliant Doctor Who story - and trust me, if you've never listened to the audio recordings of it, it's absolutely fantastic - it's also pretty much the most significant serial in Who history. For just over three seasons viewers had watched William Hartnell's Doctor travel time and space, fighting evil and exploring human history. At the conclusion of "The Tenth Planet" the Doctor collapsed to the floor, and when he sits up in "The Power of the Daleks" episode 1, the character is played by a different actor: Patrick Troughton. The series have have already been running for three years to popular acclaim, but it's with "The Power of the Daleks" that Doctor Who - the Doctor Who with which we as fans are familiar - actually begins.

The idea of the Doctor renewing his body (the term "regeneration" doesn't actually come up until "Planet of the Spiders" some years later) was a creative masterstroke that enabled the series to run for 50 years and go through 11 lead actors. Many shows have changed lead actors. In some cases they simply change the actor with one who looks quite similar. In others they actually change the lead character entirely. Doctor Who does something altogether different: the Doctor is an alien, and can actually change his entire body. New body, new personality, and a regular new lease of life for the series as a whole. I've maintained for years that regeneration is the smartest single creative decision made in the history of television drama, and it starts with "The Power of the Daleks".

Patrick Troughton plays up this change brilliantly, and he's supported by a masterful script by David Whitaker (with some uncredited rewrites from Dennis Spooner). The fact that his entire appearance has changed would, on its own, give the Doctor's companions pause. On top of that, Troughton's Doctor spends the first two episodes constantly referring to himself in the third person. 'The Doctor was fond of this,' he'll say, as if he's a completely different person who's somehow swapped places. Of course when watched in its historical context, there's no guarantee that this strange shabby man is the Doctor at all. The audience of 1966 must have spent at least a few weeks patiently waiting for William Hartnell to return. Troughton also does a brilliant job of playing an old man suddenly gifted with a younger body. When he first ventures out onto the surface of Vulcan, his first action is to see a large boulder, take a running jump and vault over the top of it. New body, new legs.

With this kind of seismic change, the function of companions as the audience's viewpoint is more important than ever, and Ben and Polly and written and performed to perfection. In many respects it's a repeat of their first journey in the TARDIS some weeks previously, in "The Smugglers". They're both incredulous at first, although Polly is quick to take the plunge and buy into the impossible. For Ben it's a harder process, and in both cases he spends a much longer time suspicious and cynical of the events around him.

So on top of this undercurrent of change, mistrust and confusion there's the main narrative. The scientist Lesterson has uncovered a Dalek spacecraft, and successfully reactivated them. They claim to be the humans' servants, and everyone on the colony appears to agree that they're going to revolutionise their lives. Lesterson wants them to provide him with fame and fortune. The deputy governor Bragen wants to use them to take the governor's job. Lesterson's assistant Janley wants to use the Daleks to undertake a popular revolt against the colony government. As the serial progresses each faction of humans is guided by avarice, ambition and greed, and all the while the Daleks are slowly and methodically preparing to kill everybody on the planet. The only person pointing out how much danger they're all in is the Doctor - but of course nobody (except, ironically, the Daleks) believes he's who he claims to be.

The original video recordings of "The Power of the Daleks" remain missing, and while I'm hopeful that recent recoveries of "The Enemy of the World" and "The Web of Fear" may lead to these episodes being returned as well, for now we're restricted to listening to the audio and looking at John Cura's 'telesnaps' to experience the story. The serial is a slow-burning thriller that climaxes in a catastrophic fashion, with Daleks slowly moving through corridors that are littered with human corpses. You can see it in the surviving photographs: this serial has one of the bleakest and most violent final episodes Doctor Who ever had. The Daleks have never been this effective, either before or since.

William Hartnell may have been the original Doctor, but it's Patrick Troughton who's the first Doctor in the sense that audiences understand him today: superficially manic and amusing, with a dark, manipulative undercurrent, willing to stand up against evil wherever he finds it, and compelled to interfere wherever he goes. The series may have started in 1963, but it's in 1966 when it secures its long-term future. It's already 50 years old, and in one format or another, I feel certain that Doctor Who is going to run and run.
Posted by Grant at 10:20 AM