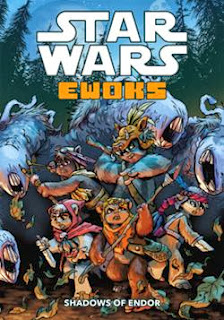 I'm not a big believer in the idea of 'guilty pleasures'. Seems to me if you enjoy something, and reading or watching it gives you pleasure, then why on Earth would you feel guilty about it? I am aware, however, that there are plenty of things out there that other people consider guilty pleasures: Twilight novels, The OC, movies starring Zac Efron, Japanese boy bands, what-have-you.

I wonder how many people will be proudly purchasing the new Star Wars graphic novel, Ewoks: Shadows of Endor. It's a compact, digest-sized comic book that combines elements of Return of the Jedi, the 1985 Ewoks Saturday morning cartoon and the 1980s TV movies Caravan of Courage and Ewoks: The Battle for Endor. It's the first time elements of all three have been mixed in together, creating - for the first time - a cohesive whole. If you're a fan of Ewoks, and there have to be more Ewok fans out there than me, then this graphic novel is a gift from the gods.

It's aimed at a family audience, so the story's not too sophisticated and the panel layout isn't too dense. As a result you'll whip through this book pretty fast, but it's a fun, light-hearted ride while you do. Kudos to Dark Horse for publishing this. I had a lot of fun reading it. (4/5)

The "Batgirl: Wanted" storyline has been a wonderfully tense one, pulling together elements from Gail Simone's entire run and really putting Barbara Gordon through the wringer. She's been forced to kill her own brother, is now on the run from a vengeful father who doesn't know she is Batgirl, now her father has shot her new boyfriend and she's now forced to her father's rescue when he comes under attack from a group of super-villains. Issue #26 is the climax; at this stage I think issue #27 deserves to feature Barbara getting a lie down, a mug of cocoa and some hugs. By the way, this issue has a beautiful cover by Alex Garner. (5/5)

The first arc of Snyder and Capullo's year-long "Zero Year" reaches a climax in this extra-length issue. This is fantastic Batman, filled with references to past storylines and classic imagery, and ending the first storyline in a way that's both exactly what I expected yet still extremely satisfying. So much care and forethought is being taken with this book at the moment. At the two-year mark I think this is the best superhero book DC is currently publishing: constantly satisfying, and featuring a writer and an artist at the absolute top of their game. (5/5)

Another week, another launch of an ongoing Vertigo title. I like that DC are pushing Vertigo so hard, and I really hope some of these new titles find an audience. This one, however, feels like a tough sell. It follows Eve Coffin, a police officer and former rebellious rich goth girl from Salem with a deadly and supernatural past. This first issue suffers on two fronts: firstly, it's a little confusing, and secondly, when it isn't confusing it feels a bit like it's wallowing in cliches. I'm happy to give it another issue to see if it picks up but so far it's a rough launch. (2/5)

This was kind of a weird issue - you'd expect it to be all climax, tying up the first arc and all, but instead it's maybe 50% climax and 50% epilogue. That's not necessarily a bad thing but it did feel like an odd sort of rhythm. I'm enjoying this comic, but I can't say I'm addicted to it. Hopefully things will pick up over the next few issues. I note that DC are publishing a cheap trade paperback of the first seven issues in February - that might be a good time to try it out. (3/5)

Katana undertakes a dangerous rematch with the flexible sword-wielding Coil. Katana is one of those annoying comic books that almost works. Nocenti's a great writer, and Sanchez and Thibert produce some great, visually dynamic artwork, but despite the talent involved and the evocative setting and characters, nothing quite gels together the way it should. It's competent, and at the time rather enjoyable, but it's not memorable. Every issue I have to strain to remember what has previously happened in the story. (2/5)

In this issue the war inside Oppenheimer's head continues. This is mad, surreal stuff, and is I suspect almost entirely unreadable to anyone not already diligently reading every issue. It also feels just a little bit redundant; we saw much of this in the first Oppenheimer issue some months back, and we're not really saying anything significantly different. Sure there's a very important cliffhanger ending, but I can't help but feel this issue could have been told with far fewer pages. (3/5)

I adore Multiple Warheads, Brandon Graham's excellent surreal tribute to French 'bande desinees'. This one-shot is in black and white, but it's also significantly longer than a typical issue - so much so that it's perfect-bound. It collects all of the early Warheads comics from before Graham's days as a noted writer/artist at Image. It's great stuff - not as accomplished as the recent miniseries, but then you wouldn't expect it to be. (4/5)

The Stormwatch team learn of the terrify- oh, diddly-pong wibble bong. Who cares? This book has long since passed through irrelevance and deep into this mind-numbing fugue state where the comic continues to get published despite no one actually reading it any more. It is the most generic yet unintelligible pile of tosh I've had the misfortune to read in a long time. I keep buying it each month partly to see if it will ever recover, and partly because I honestly keep assuming the book is getting cancelled. Seriously: the villain of this issue is named Extremax. A more crassly 1990s supervillain name you could not conceive. If you wanted to remind yourself of just how mad American superhero comics could get 20 years ago, you could do worse than check this issue out to remind yourself. (1/5)

Thor teams up with a Magnificent Seven-style array of giants, elves and dwarves to fight against Malekith the Accursed. Compared to the epic time-travelling storytelling of the "Godkiller" arc, this feels like light-weight stuff. It's not bad - in fact it's wonderfully enjoyable -  but given the quality of the previous issues this does feel a bit ordinary by comparison. Hopefully things will pick up in the next three instalments. (3/5)

Frank Miller's 300 was a phenomenally successful graphic novel, one which gained even greater exposure when Warner Bros turned it into a mega-budget summer blockbuster. I don't mind the visual aesthetic of Miller's work, but I did always detest the way he took one of the most repellent and violent cultures in antiquity and transformed them into their exact opposite: noble warriors sacrificing their lives for the cause of freedom and democracy. I'm very excited, then, about Three. It's a pointed and open response to Miller's work, offering a respectful but opposed view on who the Spartans were and what they were like. Gillen's researched his story very well, and Kelly and Bellaire illustrate it vividly as well. I do suspect this will read better when assembled as a graphic novel, but I absolutely encourage you to check it out now. I like this kind of creative conversation between works, and this is an aspect of the Spartans that absolutely required representation. (4/5)


DC Comics. Written by Paul Levitz. At by RB Silva and Joe Weems.

Power Girl struggles with her failing powers after last issue's fight with DeSaad. Meanwhile Huntress continues to fight crime in her own non-superpowered fashion. This is a reasonably enjoyable book, but far from the quality it's hit in the past. It feels a bit like Levitz is in a funk, and I'm just waiting now for the pace and drive of the book to pick up again. Bottom line, however, is that this is still a very enjoyable comic book focused on the friendship between two strong, interesting women - and that's still enough of a rarity in superhero comics for me to get a lot out of this. (3/5)

"Battle of the Atom" reaches part 6 out of 10, and the number of different versions of each X-Man is getting delightfully ridiculous. Every issue I expect things to settle down and start making sense, but instead we're just getting more and more complicated as we go. The dialogue sparkles, and the humour that's laced throughout goes a long way to overcome the growing confusion I'm feeling over what's actually going on. (4/5)