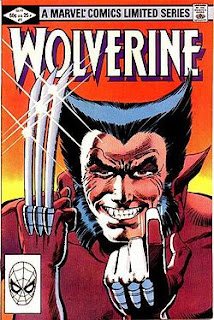 When Wolverine learns that the love of his life has unexpectedly married someone else, he boards the next plane to Japan - finding organised criminals, conspiracies and several violent attempts on his life. This is Wolverine, a 1982 four-issue miniseries that was Logan's first-ever solo comic book and which led to decades' worth of solo adventures for the character since. It's written by Chris Claremont, then pretty much the most popular comic book writer in America thanks to his work on Uncanny X-Men. The art is by Frank Miller, then a wunderkind artist in his mid-20s, hot off the success of drawing Daredevil.

Even 30 years on, Wolverine is a tightly scripted and beautifully drawn comic miniseries. Chris Claremont was absolutely one of the best writers of superhero comics in the early 1980s, and Frank Miller's art was at a stage when it was bold and inventive without being distorted too far into overly muscular charicature (not to mention hysterically misogynistic and Islamaphobic).

This is a comic that finally gave Logan a bit of depth, digging into his personality and making him a bit more than just an angry Canadian with metal claws. The character is one of Marvel's most popular now, and a lot of that popularity stems from what Claremont and Miller did here.


The big problem I have with this miniseries is its depiction of Japan. Even for 1982 it's woefully stereotyped and mildly offensive. Claremont and Miller's Japan is a country of samurai and ninjas, of women honour-bound to stay with abusive husbands to please their father, and where everybody goes to kabuki performances for a night's entertainment. It's a treatment that rides roughshod over the good aspects of the comic, and that leaves me fairly ambivalent of the comic as a whole. It leaves me recommending this book not as an excellent work in its own right, but as one with major caveats: a historical example rather than an independent quality comic.

I read Wolverine for the first time this weekend as part of the Marvel Comics Graphic Novel Collection, a partwork magazine format range distributed in Australia by Hachette. Basically every month they send me two hardcover editions of Marvel Comics collections. Other recent books I've received include Captain America: The Winter Soldier, The Incredible Hulk: Silent Screams and Thor: Reborn. They seem pretty good quality so far, print-wise, and other than a few dents in the corners during delivery they're pretty good value at $19.95 per volume.
Posted by Grant at 9:55 AM